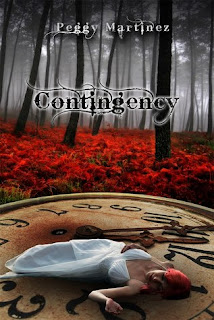 Eighteen-year-old Sage Hannigan wants to get back to her own time, preferably one that hasn’t been destroyed by an underworld plot brewing in Edwardian-era South Carolina. How hard can it be?

All she has to do is:

1. Learn to use newly acquired warping skills to bend time to her will.
2. Take out a few rogue vampires.
3. Join an ancient secret society.
4. Figure out who is putting the time stream in jeopardy.
5. Find and maim whoever invented the corset.

Sage never asked to be chosen by the Druid Priestess, Amerach, to become a Warper. She also never asked to have the future hanging on her shoulders or to warp a hundred years into the past. She certainly never asked to meet Dr. Aldwin Blake, who would make her question her desire to get back to her own time. But if she fails her mission, people will die, history will change, and the present she wishes to return to will be no more.

A gorgeous cover and a very good friend’s recommendation sold this book to me in a heartbeat. I’m a sucker for eye-catching book covers and many times I’ve purchased books without reading the blurb, so of course a book with a cover as breathtaking as this one would be no exception. This being the author’s debut novel and me having only read one time-travel book before, I was a little worried I might be disappointed although I didn’t have an preset expectations of Contingency. Two chapters into the story though, I lost touch with reality as I immersed myself into this unforgettable book; my initial trepidation completely forgotten.

The highlight for me was the remarkable characters the author created. I connected with them easily and by the middle of the book they felt like friends to me. Sage is a lovely character with a unique voice and tongue-in-cheek sense of humor, but she has a rather short fuse on her temper. There are vampires, werewolves and a love-triangle – my three least favorite things – BUT the author thankfully stayed away from overused clichés and the instant-attraction angle. I actually enjoyed this specific triangle between Sage, Aldwin, and Soren and I’ll let you know that I’m definitely Team Soren. The romance felt natural and wasn’t rushed which gives the reader the opportunity to get to know all these characters first before falling in love with one or both of them. More things I enjoyed about the story were the fight scenes, the unexpected betrayals, and the heart-stopping scene with President Rooseveldt.

The writing flows smoothly, the pacing is just right, and the plot is well-executed. It is clear from the start the author is a natural storyteller as the dialogue of the characters fit perfectly into the era in which the story takes place. The stunner ending paved the way for a second book and I can’t wait to read what happens next to Sage. The author managed to effortlessly make me feel as though I was part of Sage’s group of friends in the Edwardian era. The surroundings and life in the early 1900s were so well described I could easily envision the setting and feel of this particular time in history. Contingency truly is an amazing story and fans of Cassandra Clare’s Infernal Devices and The Mortal Instruments series’ should give this novel a go. It’s an easy read I finished in a day.

Contingency by Peggy Martinez has 42 reviews on Goodreads. Read it here.
PURCHASE LINKS

Q. What would your choice of music be as a theme-song for Contingency?

A: Time is Slipping Away by Course of Nature & I actually have a Playlist on Spotify for Contingency.

Q. What sparked the idea for Contingency?

A: Contingency was a tiny sliver of an idea that I wanted to write a book featuring both time travel & vampires...and it really just morphed itself into the story I ended up with, after a lot of sleepless nights and rewrites, of course. :)

Q. How long did it take you to write it?

A: From start to finish the book took me probably 8-10 weeks to write the first rough draft.

Q. How much impact does your childhood have on your writing?

A: I am of the frame of mind that while our childhood plays an important part of who we become as adults, we each have our own individual quirks, personalities, and personal drive. While I wasn’t really encouraged or discouraged to read, I found the written word as a means for escape and vacation. One of the first books that ever kept me awake all night reading and flipping pages, desperate to find out what would happen next was Jane Eyre by Charlotte Bronte. In many ways that book changed my life.

Q. Have you ever read or seen yourself as a character in a book or a movie?

Q. Except as yourself, which character would you want to play in a movie about your life, and why?

A: Oooh this one is a hard one. Hmmmm. I’d have to say...an actress that can be serious, but has a fun side. Someone who wouldn’t be afraid to get her hands dirty, but enjoys her feminine side and isn’t afraid to love butterflies, the color purple, and gangster movies all at the same time. She’d have to be real and not untouchable. Is there an actress that will fit that description? Maybe a modern version of Jane Eyre? Yeah...I like that idea! :D

Q. What are the most important attributes to remaining sane as a writer?

A: Don’t sweat the small stuff. Don’t kill off characters just because you’re in a bad mood. Above all else...remember to write because it’s what you love to do, not because it’s a job or because you think it will make you boatloads of money. (I’m still waiting for my boat to come in. hehehe)

Q. Are there any occupational hazards to being an author?

A: There are so many...let me list a few of the major ones...I am in no way saying I have actually “fallen victim” to any of these hazards though. Just wanted that on the record. Let’s see: Paper cuts, Sleepless nights, Caffeine Highs, Caffeine withdraws, Delusions of grandeur, diets consisting of slim jims, twizzlers, and soda pop, accidentally calling one of your children by your character’s name....hmmmm, shall I stop there?

Q. Has the dog ever eaten your manuscript?

A: I don’t have a dog...but, I do I have five kids...so far, none of them have eaten any of my manuscripts, but my writing career is still very young.

Q. What are you like first thing in the mornings before you’ve had your first cup of coffee?

A: I’m not a HUGE coffee drinker.

Q. What's the most blatant lie you've ever told?

Q. What is the worst “crime” you committed as a teenager, which your parents had to punish you for?

A: This I’m serious about...I can’t think of anything. Not even a little something. I was very straight laced as a teen. OHHHH wait a minute...(In my defense...this was an accident!!)
When I was a Freshman in High School I played volley ball and was learning fast pitch softball. Evidently, I had a really really fast arm, but my aim was not-so-great. Anyway, I enlisted my little sister to help me practice after school. There were a few problems with this that I didn’t think were that big of a deal until afterwards. #1. She was about 3 years younger than me...maybe 12 and she didn’t have a catcher’s glove...or ANY glove for that matter. #2. We didn’t have a softball. Now, me in my brilliance, wasn’t going to let that deter me...so I picked a dozen or so grapefruit. (We lived in Florida) and positioned my little sister the correct distance away and proceeded to lob grapefruit at her at about 50 mph. (What!?! They were about the same size as a softball!) Unfortunately, one hit her in the head and split open...she was more upset about the juice and pulp exploding on her head than actually being hit. What a girly girl! I did get in some trouble for that one.

Q. What is your worst/best memory of high school, and why?

A: Best high school memory was getting bumped to varsity volleyball as a freshman. Worst was the suicide runs I had to do to make the team. (Those are a specific type of running...that really really hurt...especially when I had to walk home after running them!)

Q. Are you fun to go on holiday with?

A: Absolutely! I bake & love music!

Q. What makes you laugh?

A: My children. My husband. Sometime people when they don’t even mean to be funny. I have a very dry and sarcastic sense of humor.

Q. Any advice for aspiring writers?

A: Don’t quit. Listen to advice and constructive criticism, but don’t let it define you or your work. Most of all, be true to yourself. <3 i="i">

Peggy Martinez is a homeschooling mom of one boy and four girls.
She has been married to her soul mate, Omar, since January 2000. She enjoys reading, writing, soap making, all things aromatherapy, and Twizzlers - lots of Twizzlers. She dreams of one day owning a small homestead, raising some chickens along with her children, growing a large garden, and eventually taking a dream vacation to Greece. It isn't too farfetched to think you could happen upon her and her husband having a conversation about religion, political conspiracies, a zombie apocalypse, or gangster movies.