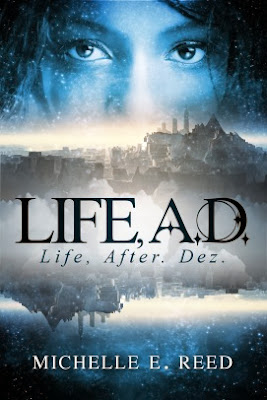 In Life, A.D. you have two choices: join the program or face the consequences.

Seventeen-year-old Dez Donnelly crashes headlong into fate on the side of a rural highway, her life ending in a violent collision of steel and screaming brakes. The train that delivers her newly departed soul to the crossroads of the afterlife won’t be carrying her to the sweet hereafter until she accepts her abrupt end and learns to let go of the life she’ll never finish.

Her new reality is conduct manuals, propaganda, and unrelenting staff, all part of a system to ease her transition from life to death, while helping her earn her way out of limbo. Atman City, beautiful and enticing, is an ever-present temptation that is strictly off limits to underage souls. The promise of adventure proves too strong, and beneath the city’s sheen of ethereal majesty, Dez discovers a world teeming with danger.

Welcome to Life, A.D. where being dead doesn’t mean you’re safe, and the only thing harder than getting out of limbo is getting through it. 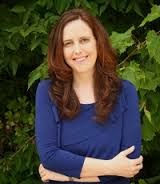 Michelle E. Reed was born in a small Midwestern town, to which she has returned to raise her own family. Her imagination and love of literature were fueled by a childhood of late nights, hidden under the covers and reading by flashlight. She is a passionate adoption advocate who lives in Wisconsin with her husband, son, and their yellow lab, Sully. 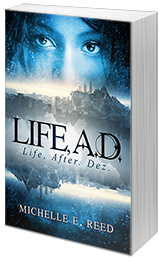 To stand a chance of winning a signed copy (US) or one of three e-book copies (Int) of Life, A.D. by Michelle E. Reed, complete the below rafflecopter form. It’s that easy!