(Click on the tour banner to go to the tour schedule) 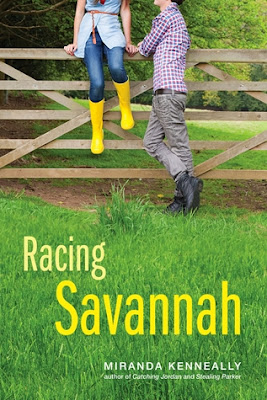 He lives in the estate house, and she spends most of her time in the stables helping her father train horses. In fact, Savannah has always been much more comfortable around horses than boys. Especially boys like Jack Goodwin—cocky, popular and completely out of her league. She knows the rules: no mixing between the staff and the Goodwin family. But Jack has no such boundaries.

With her dream of becoming a horse jockey, Savannah isn’t exactly one to follow the rules either. She’s not going to let someone tell her a girl isn’t tough enough to race. Sure, it’s dangerous. Then again, so is dating Jack…

Racing Savannah is the fourth of Miranda Kenneally’s books I’ve read, and I enjoyed it as much as I did the previous three books in the Hundred Oaks series. I specifically enjoy this series because each book brings in new and/or familiar characters in a setting that is already well-known to the reader, but every time with a brand new story. I would even go as far as comparing it to watching a new season of a well-loved tv series.

I finished this delightful read in less than a day. Halfway through the first chapter I already felt right at home in Savannah’s world, and I was captivated by and totally in love with the Goodings’ farm and their horses. That’s right. I didn’t let anything get in my way of finishing this book the same day I started it. By now I’m so used to this author’s easy-reading style of writing I devoured this novel in mere hours. What stood out for me is how extensively the author did her research on professional horse racing and horse mannerisms. If I didn’t read in the afterword that all the interesting tidbits she shared about horses throughout the story came about because of her thorough research, I would’ve easily believed that she was sharing her personal experiences growing up around horses with the reader. I’m saying Savannah’s story had a very realistic feel to it. Not only because of the horses, but also because of Savannah’s impoverished background.

Savannah is an amazing character and one that could serve as inspiration to young women everywhere regardless of background. I loved almost everything about this girl. She’s down-to-earth, yet confident and sure of her choices. She makes mistakes but learn through it. She reaches out to others and puts her unborn sibling first; and though her family is dirt poor and she’s caught scrubbing floors by her love interest, she holds her head high and doesn’t back away from a challenge. But most importantly – and this is what made her an unforgettable character in my opinion – is that she understand her self-worth and never feels she needs to be validated to be appreciated. She shows respect to her dad and his pregnant girlfriend even though she doesn’t always agree with their choices and decisions. Also, she never hesitates to place her trust in people, although she’s been hurt before. There’s so much more I can say about Savannah as she’s a multilayered character, but then I’d go on forever. Apart from Savannah, there is actually an entire cast of characters worth mentioning. But to keep it short I’ll just say that each and every character contributed to the overall awesomeness of this book.

Now for the dreaded romance. OK, so I’m not fan, but, like a few of my other favorite authors, Kenneally knows how to write romance and keep it short and sweet. This is, after all, a love-story, but the author adds so many layers to it with family dynamics, new friendships, horse racing, and the main character learning through life’s little lessons how to make important decisions about her future, that you get so much more out of it than a mere straightforward tale of love and lust. I liked Jack’s character as well, but we don’t really get to peel away the layers on him. I loved how he had his three farm hounds milling around his feet in most of the scenes he meets up with Savannah. It added that rural lifestyle feeling to the story. That brings me to another point. I know nothing about life on a farm, much less one where they train race horses. I’m a born and bred city girl. But, and here I have to hand it to the author, she effectively managed to put me right there on the Goodwins’ farm, and she did it so well I swear I could smell the horse manure! Even at the horse races I could feel the wind blowing through my hair and the mud spattering on my legs when Savannah was racing Jack’s stubborn horse, Star.

One of the elements of this book that touched me deeply was the family dynamics. I’m a sucker for good family set-ups in books. Bottom line: I want to feel part of it. Family is very important to Savannah, and also to Jack. In their own way, they each try to keep their family happy with little sacrifice on their part. It’s the first time I come across a novel where both the protagonist and her love interest have this in common; them both being respectful and considerate towards their parents. Jack is used to having money and having people serve his every need, while Savannah is one of the people working for Jack and his family, cleaning their house and tending to their horses. Savannah knows what it’s like not to have any money, while Jack’s future is cemented. So then, what is the common denominator that brings these two together? One very cheeky and headstrong horse named, Star. But really, it’s not as simple as I make it sound. Keep in mind that Savannah and Jack’s families can’t allow them to be together as employer is not supposed to hobnob with employee (it sounds very Romeo and Juliet-ish, but without the drama and tragedy).

Racing Savannah is a wonderful read written by a very talented author. It has all the elements I loved from the previous books, but with new characters (and a few the reader might recognize from previous books), and an entirely new and refreshing plot. It’s not necessary to have read the previous books in the Hundred Oaks series to enjoy this one. Racing Savannah stands entirely on its own, but because I have read the first three books before reading this one, I felt I would’ve missed out on some of the secondary character relationships had I not read the other books first. Of course, it’s all up to you whether you want to start at book one or jump right in and see what this excellent book with its exceptional characters and storyline is all about. Whichever way, I highly recommend Miranda Kenneally’s books to young and old alike!

BOOKS in the HUNDRED OAKS SERIES

Growing up in Tennessee, Miranda Kenneally dreamed of becoming an Atlanta Brave, a country singer (cliché!), or a UN interpreter. Instead she writes, and works for the State Department in Washington, D.C., where George W. Bush once used her shoulder as an armrest. Miranda loves Twitter, Star Trek and her husband.

Fill out the below rafflecopter for a chance to WIN this amazing prize!!!

1 x Pair of Ralph Lauren riding boots, or another pair of boots at equal or lesser value. This giveaway is open to US and Canada residents only.

Awesome review! I'm also a big fan of this series and every book is just so full of charming characters and a real wonderful story. I also know nothing about horses and I felt nothing but fascinated by that aspect of the story. Glad you liked it, too! The cameos are the best! :D