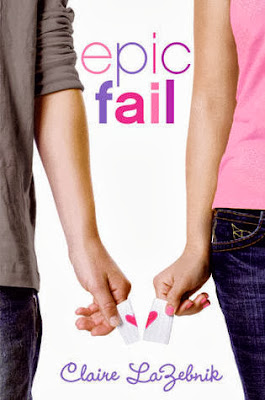 At Coral Tree Prep in Los Angeles, who your parents are can make or break you. Case in point:

- As the son of Hollywood royalty, Derek Edwards is pretty much prince of the school--not that he deigns to acknowledge many of his loyal subjects.
- As the daughter of the new principal, Elise Benton isn't exactly on everyone's must-sit-next-to-at-lunch list.

When Elise's beautiful sister catches the eye of the prince's best friend, Elise gets to spend a lot of time with Derek, making her the envy of every girl on campus. Except she refuses to fall for any of his rare smiles and instead warms up to his enemy, the surprisingly charming social outcast Webster Grant. But in this hilarious tale of fitting in and flirting, not all snubs are undeserved, not all celebrity brats are bratty, and pride and prejudice can get in the way of true love for only so long.

This is without a doubt going to be one of those books I’ll be thinking about for the next couple of months! What an unbelievably fabulous read this turned out to be! Even before I started reading Epic Fail I already had my mind made up that this was going to be yet another candy floss YA romance, and although it is definitely YA, and undoubtedly a romance, it is most certainly not a fluffy candy floss read. Unlike some of my most recent reads, this book actually has substance and breaks out of the traditional YA mold. Honestly peeps, this was such a delightful, feel-good read, I zipped through it in a day.

One of the things I’m starting to despise in YA is the constant absence of parental figures and homes with structure and rules to guide our protagonist(s) on their merry way through life. In Epic Fail, the main focus is squarely on the family dynamics of the Gardiner family. There’s not only one protagonist, but two. Or maybe a whole bunch, depending on how you look at it. I loved, loved, loved the family set-up in this story and how at home I felt with Elise, her three sisters and both her adorably dorky, but strict, parents. This isn’t just a tale about one girl falling in love, but two sisters falling in love at different times during the story. Instead of Elise having a best friend whom she can confide in and share experiences with, she has her sister, Juliana, to whom she’s practically joined at the hip. They both go to Coral Tree Prep where their mother is the new principal and their father the math teacher. Juliana pretty much has the insta love thing going from the first chapter, but Elise, from whose POV we’re getting the story, isn’t as quick to give her heart away. Especially not to Derek, son to two of Hollywood’s biggest stars, who has half the girls in school falling over their feet to get him to notice them.

I specifically enjoyed this book for the fact that it raises the importance of valuing someone not for their net worth or their good looks or how famous or important their parents are, but simply for who that person is. This is taught to Elise and her siblings by the values their parents instill in them, which are evident from the conversations they have with them. Also, respect is a big issue in this story, and I loved how these kids showed respect for their parents, and also how Elise stood up for one of her classmates when everybody was ganging up on him. Of course, everything isn’t perfect and sunshin-y and happy-go-lucky for all. The book sticks to real-life situations with characters having to learn to reserve judgment, not jumping to hasty conclusions, and discerning between what’s acceptable and what not. Epic Fail also showcases the comparisons between rich and middle class teens, their behavior and attitudes towards adults and each other, and the difficulties faced by Elise’s mother as Coral Tree Prep’s new school principal. Most importantly, it highlights the point that people aren’t always what they appear to be on the surface.

Often the importance and advantages of familial structures as a means to ground the reader are overlooked in what I love to call candy floss (overtly sweet and sticky) romance and most YA books. My experience is that most authors so easily succumb to writing what works for hundreds of other authors instead of taking the initiative to try something new. At times, Epic Fail tended to be slightly predictable, but that was easy to overlook once I felt part of Elise’s family and made myself comfortable in the Gardiner’s home. Lazebnik created intelligent characters with flaws that make sense. She dared to write a story that shies away from the familiar without destroying the YA mold entirely, and for that I commend her. The dialogue and witty banter often had me rolling on the floor laughing and endeared these characters to me in no time. I loved all six members of the Gardiner household and I had no difficulty relating to their daily routines. The secondary, but not less important, characters were also expertly developed and the story shimmied along at an undemanding pace, effortlessly keeping me entertained. This book is sure as heck worth every cent and one I can’t recommend highly enough!

Epic Fail by Claire LaZebnik has 1362 reviews on Goodreads. Read it here. I grew up in Newton, Massachusetts, went to Harvard and moved to LA.  (My name was Claire Scovell for a large part of all that.)  I’ve written five novels for adults, Same as It Never Was, Knitting under the Influence, The Smart One and the Pretty One, If You Lived Here, You’d Be Home Now, and Families and Other Nonreturnable Gifts.  I’ve also published two YA novels with Harper Collins: Epic Fail and The Trouble with Flirting (due out in winter, 2012/3). With Lynn Koegel (who’s absolutely brilliant), I co-wrote  Overcoming Autism: Finding the Answers, Strategies and Hope That Can Transform a Child’s Lifeand Growing up on the Spectrum: A guide to life, love and learning for young adults with autism and Asperger’s.  I contributed to an anthology play called Motherhood Out Loud, and have been published in The New York Times, Self, Vogue and other magazines.
I live in the Pacific Palisades with my husband Rob (who writes for “The Simpsons”), my four kids (Max, Johnny, Annie and Will) and too many pets to keep track of.
AUTHOR LINKS