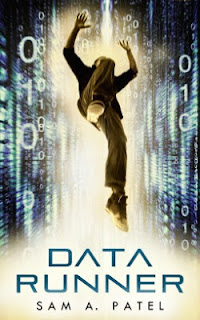 In the not-too-distant future, in what was once the old City of New York, megacorporations have taken over everything. Now even the internet is owned, and the only way to transmit sensitive information is by a network of highly skilled couriers called “data runners” who run it over the sneakernet. It is a dangerous gig in a dirty world, but Jack Nill doesn’t have much choice in the matter. A brilliant young math whiz and champion of parkour, Jack must become one of these data runners in order to get his father out of a major gambling debt. But when a mysterious stranger loads Jack’s chip with a cryptic cargo that everybody wants, he soon becomes the key figure in a conspiracy that could affect the entire North American Alliance. Now it’s all up to Jack. With the help of his best friend, Dexter, and a girl who runs under the name Red Tail, Jack will have to use all his skills to outrun the retrievers and uncover the truth before they catch him and clip him for good.

I’m not a fan of sci-fi movies or sci-fi books, but the combination of this book’s title, cover and blurb intrigued me to no end and I just had to read it to see what it’s all about. Admittedly, I have watched a couple of terrific sci-fi movies (think I, Robot and The Fifth Element to name a few memorable ones), and have recently finished a techno-thriller with tons of sci-fi elements by Boyd Morrison. So I’m no stranger to this genre and won’t shy away from reading it as long as the story stays within our planet’s atmosphere. I’m definitely not into the whole Star Trek type sci-fi.

Anyhow, Data Runner is a dystopian science-fiction thriller not too far into the future. I enjoy dystopian novels, but am beginning to find them somewhat repetitive in that they’re not offering anything new. The world as we know it always ends with some plague, virus or biochemical warfare. The dystopian elements in this story is very different and here the world has changed (instead of ended) because of a mega-corporation controlling something we absolutely can’t survive without. If you stick out the slow start and don’t find regular intervals of info dump overwhelming like I did, it’s a really good read. The main character, Jack, from whose point of view the story is told, is a well-balanced, wholly likeable character. I can say the same for his friends, his father and their allies. All the characters in this novel are fully fleshed out and grow on the reader as you get to know them along the way.

One of the elements that made this such a remarkable read is without a doubt the world-building. It’s a complex setting which at times boggled my mind when trying to form the whole picture, but it was done creatively, and clearly a lot of thought and effort went into constructing this backdrop. Another element that had me riveted was the race against time to retrieve the data from Jack’s “wing” and him trying to stay one step ahead of his pursuers. Jack constantly has to make on the spot decisions as to how to survive the next attack, who he can trust and who not to.

It’s very seldom I come across a YA book aimed specifically at male readers, or ones I can recommend exclusively to guys looking for an adrenaline-pumping read loaded with conspiracies, hostile takeovers and characters skilled in parkour. Yes, girls would enjoy it too, but my honest opinion after reading this novel is that guys would enjoy this much more. The advanced technology, mechanisms, gadgets, military gear and weapons used to propel this suspense-laden plot would inarguably satisfy many a male fantasy. The writing is fluid and the romance only a drop in the bucket. It’s an exciting read and although I sometimes lost my hold on all the finer details, I never lost the plot. The ending is a stunner and that alone already has me eagerly anticipating the next instalment in this extraordinary new series.

“That is something that has always impressed me about him, how good he is with his hands. I’m good with my hands when it comes to electronics-wires, transistors, antennas, that sort of thing. Mr. Chupick is good with his hands when it comes to the stuff that really matters, the stuff that people can’t live without. I know about things that can change the world; the stuff he knows could rebuild it from scratch.”

PLEASE NOTE: This excerpt was taken from the uncorrected ARC I received for review.

Data Runner by Sam A. Patel has 18 reviews on Goodreads. Read it here.