When darkness consumes you; will it be hard to find the light?

After Jade's world was torn apart, she is unsure of where she belongs, if anywhere at all. Deceived by those she trusted the most, she must now accept her fate and the life that lays before her.
The voices are back but this time, they are trying to lure her into the darkness. But could they be telling her the truth? That the only person she has been able to trust since the death of her boyfriend, Avan, is lying to her too? If the voices are right... Could she really trust him?

In Fallenmore, the second book in the Feathermore Trilogy, Jade will embark in a quest through the pits of Hell. The question now is: once she is in, will they ever let her out?

What would your choice of music be as a theme-song for Fallenmore?

A: This is a tough one. I have a long list of songs I listened to while writing Fallenmore, but to pick just one… yikes. Ummm, maybe Within Temptation’s “What have you done.” But as I said, certain scenes have their own soundtrack.

How did you come up with the idea for Fallenmore?

A: Well, to be completely honest, the story unfolds as I write. “Feathermore” left off with a cliffhanger, and so I knew I had to start from there. Little by little, the characters make their own decisions and take the story where they want. I’m sure it would be easier if I actually had a plan for it, but this works for me… so far!

How long did it take you to write it?

A: *sighs* The first time I wrote it in less than two months. I was on the next to last chapter and lost it all. *smacks self on the forehead* The second time about 5 weeks. But it was so much harder! I was so depressed at losing everything. Every time I tried writing a scene I had nailed before, and now I couldn’t get right, well, it was plain frustrating. But I am a firm believer things happen for a reason, and I think the second “Fallenmore” is better than the first.

How much impact does your childhood have on your writing?

A: None. *laughs* I was a terrible student! Not because I wasn’t/am not smart but because school just didn’t interest me at all. Now, looking back I wished I had paid more attention, especially in Literature/English class. But I did love reading, so that certainly brought my love for books. R.L. Stine rocked my socks!

Have you ever read or seen yourself as a character in a book or a movie?

A: I think with every book that has a female point of view. I love becoming the character and experiencing their life with and through them. I loved thinking I was Bella Swan. Sure, now the movies have screwed that up for me, but I read all four books numerous of times.

Except as yourself, which character would you want to play in a movie about your life, and why?

A: Huh, this is an interesting question and I don’t know if I have an answer. Maybe one of my best friends, Virginia, because she has travelled the world and been to some really exotic places. Otherwise, I have not a clue!

What are the most important attributes to remaining sane as a writer?

A: Having time for the real world and being able to multi-task, for sure!

Are there any occupational hazards to being an author?

A: Yes, many! Some of the most common are caffeine addiction, talking to imaginary people, dirty homes and poorly cooked meals.

Has the dog ever eaten your manuscript?

A: Hahaha, no, thank goodness! But she did get jealous and not let me write.

What's the most blatant lie you've ever told?

A: Ugh, all my lies are obvious! Hence why I don’t lie. I am terrible at it. I get all sweaty, and my voice breaks, my heart pounds so hard you can actually see it… But, let me tell you who blatantly lied when I was little. I was about maybe 4 years old and my cousin was 7. My mom comes into my room where we were playing and starts yelling, asking who had written all over the walls. My cousin obviously said it had been me. Well, the walls were scribbled with his name written over and over again… yeah buddy, nice job!

What is the worst “crime” you committed as a teenager, which your parents had to punish you for?

A: Well, we could be here for a while… Umm, I snuck out of the house with a friend, went to a nightclub (in Argentina you have to be 18 to drink and get into clubs- we had fake IDs). We couldn’t get into the club so we slept in a gas station and then my older brother found me at 6 in the morning walking home. Yikes. I also set a tree on fire… Yeah, let’s just stop right here.

What is your worst/best memory of high school, and why?

A: Worst, my female classmates. Most of them hated me because I hung out with the boys. What can I say; I am one of the guys! And the best, meeting my best friend and getting into stupid trouble.

Are you fun to go on holiday with?

A: I am fun to do anything with!

What makes you laugh?

A: Anything. I am the one bursting out laughing for no reason. Tickling me works, too.

Any advice for aspiring writers?

A: Give your writing a fair chance. Don’t give up when it gets harder. Keep your B.I.C (butt in chair) and write, write, write. Let your imagination take you places you never dreamed of going. In the end, it is worth your while. 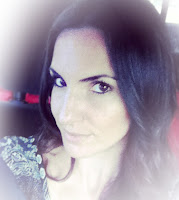