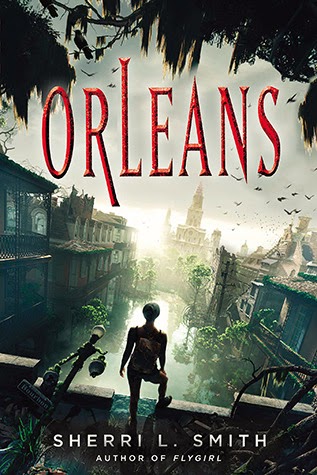 After a string of devastating hurricanes and a severe outbreak of Delta Fever, the Gulf Coast has been quarantined. Years later, residents of the Outer States are under the assumption that life in the Delta is all but extinct… but in reality, a new primitive society has been born.

Fen de la Guerre is living with the O-Positive blood tribe in the Delta when they are ambushed. Left with her tribe leader’s newborn, Fen is determined to get the baby to a better life over the wall before her blood becomes tainted. Fen meets Daniel, a scientist from the Outer States who has snuck into the Delta illegally. Brought together by chance, kept together by danger, Fen and Daniel navigate the wasteland of Orleans. In the end, they are each other’s last hope for survival.

Sherri L. Smith delivers an expertly crafted story about a fierce heroine whose powerful voice and firm determination will stay with you long after you’ve turned the last page.

I have decided not to bore anyone with half a page of oh-my-gosh-you-HAVE-to read-this-book fangirling, but I’ll rather just share why I loved this book so darn much and why you might also love it so darn much. But just for the record, I loved this book with my entire being and I would LOVE for you to read it.

The first thing that struck me right at the beginning is the strong voice of our sixteen-year-old protagonist. There’s absolutely nothing average or Mary Sue-ish about her. Nothing, I tell you! Her emotional strength, resilience, dogged determination, and endurance left me speechless and in awe. Not only does she wear all those traits like a second skin, she also inadvertently take on the role of protector keeping a newborn baby and her adult male companion safe from harm by the bloodhunters and other spine-tingling dangers.

Based on those two points alone, you should already be adding this book to your to-read list. But wait, there’s more. Not only does Fen have a strong and unique voice and does she involuntarily assume the role of protector, she also has to navigate a wasteland filled to the brim with all sorts of dangers. I have to applaud the author for her ingenuity creating the aforementioned perilous wasteland. The New Orleans of today is buried underneath the Orleans of 2052 as represented in this amazingly thrilling novel. Tribes have formed by blood type and the ones outside the O blood group hunts the ones with the O blood type that will sustain them and keep them alive while the Delta Fever ravishes their bodies. I was adequately impressed by the world-building, the idea behind this novel, and even how the end of this part of the U.S. came along by natural disaster.  By the time I put this book down after finishing it, my nerves were fried from the fear and uncertainty I experienced alongside the two main characters in their fight to survive.

Here’s the very best part, though. There is NO romance in this book. Trust me, there’s no time for romantic interludes anyway as Fen and Daniel are constantly on the run (and it would’ve been a little icky if they had ended up romantically involved). So, of course, there being no romance was a big yay for me. Still, there was so much happening in this fast-paced novel, the story wasn’t affected in ANY way by the lack of romance.

Fans of dystopian novels weary of reading all the same old tired elements in this genre will have a field day. In Orleans the world didn’t end, it simply moved on. The only difference is that New Orleans became Orleans as the Delta was quarantined and cordoned off from the rest of the U.S. because of the incurable, contagious Delta Fever. Life goes on as usual for those in the rest of the country, but in Orleans life has gone back to a time before modern civilization where tribe means life.  Take my word for it though, it’s not an easy life. It has become a world where stealth, sacrifice, and strategic survival skills mean the difference between life and death. There’s no revolution or a self-righteous protagonist on her quest for a better world. It’s just a selfless teen protecting what is dear to her and her quest to find this baby a home outside of the horrors of an existence she can’t escape. It’s not about her at all, just the baby. I also enjoyed Orleans because it has a varied cast of characters and a wicked twist near the end. Orleans is all about survival, and the author deftly misleads the reader to trust the wrong characters. That, of course, leads to a whole bunch of surprises.

The only frustration I had with this book is that there isn’t a sequel. Honestly, that’s it! It ended in such a way that it seemed there might be a follow-up, but as far as I can tell this is a stand-alone. I really, REALLY, would’ve liked for there to be more. Anyway, I recommend this book to everyone, no matter their genre of preference. It was unmistakable how much research, effort, and imagination went into this plot, the characters, and the world-building. I was more concerned with how Fen was going to keep that newborn alive, and that, dear ones, kept me riveted and invested in these characters. I believe everyone who reads this book will find something to take away from it at the end.

Sherri L. Smith's life can best be summed up geographically. Born in Chicago, IL, she spent her childhood in Staten Island, NY, Washington D.C., and Upstate New York. Her parents divorced when she was twelve. A year later, she moved back to Chicago with her mother and big brother. After high school, it was off to New York City for college, San Francisco for graduate school, and then Los Angeles, to make movies.

After leaving Disney, Sherri found an unlikely home with a construction company, working in a triple-wide trailer on the tarmac at Los Angeles International Airport. From there she spent nine hilarious years working at Bongo Comics, the company that brings you THE SIMPSONS in print. Currently, Sherri happily spends her days writing novels and visiting her readers in schools and libraries across the country.

She lives in Los Angeles with the love of her life, and is currently working on her next book.

I'm really looking forward to reading this, it sounds awesome! And no romance is a plus for me and a nice change. Thanks for the review! I'll be adding this to my wishlist for sure.

I've been waiting to see reviews for this book, and then you start out with, "have decided not to bore anyone with half a page of oh-my-gosh-you-HAVE-to read-this-book fangirling, but I’ll rather just share why I loved this book so darn much"..... yeah, I'm sold!
LOL
Great review!

Thank you for your kind words, Alina and Freda! You both just made my day! This book is definitely worth it and I'm sure you won't regret reading it. Thank you so much for taking the time to read my review. :)
Angie