REVIEW: WHAT WOULD EMMA DO? by Eileen Cook 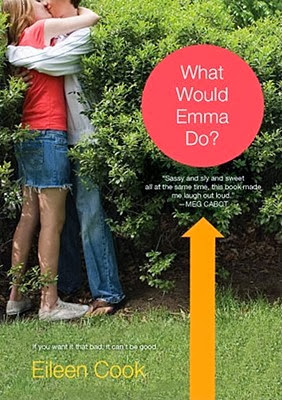 Thou Shalt Not Kiss Thy Best Friend’s Boyfriend...again...

There is no greater sin than kissing your best friend’s boyfriend. So when Emma breaks that golden rule, she knows she’s messed up big-time...especially since she lives in the smallest town ever, where everyone knows everything about everyone else...and especially since she maybe kinda wants to do it again. Now her best friend isn’t speaking to her, her best guy friend is making things totally weird, and Emma is running full speed toward certain social disaster. This is so not the way senior year was supposed to go.

Time to pray for a minor miracle. Or maybe, just maybe, it’s time for Emma to stop trying to please everyone around her, and figure out what she wants for herself.

I’m probably going to say it more than once, but I loved absolutely everything about this book! If it comes down to it, I’ll even admit to wanting to spend a day inside Eileen Cook’s mind, because it seems that it could be a fun place to be for anyone who has ever read any of her books. Admittedly, apart from this book, I’ve only read one of her books so far, but I have another two waiting on my kindle to be read, and because I had such an awesome time reading this book – and finishing it in less than a day – I’m moving those two books up on my to-read list.

What Would Emma Do is exactly the sort of book I would like to read more of. It has the exact mix of all the elements that makes it that perfect read. First of all, it takes place in a little town called Wheaton. It’s not just any small town; it’s one of those small towns that locals describe as “the heartland of America”, and where religion is taken so seriously, it almost reaches cult-like proportions. Nothing much ever happens in Wheaton, but high morals and the church’s rule are the order of the day. Anything or anyone that is considered different, or falls outside of the belief system of the citizens of Wheaton, is rejected and revolted against with a burn-at-the-stakes passion. So imagine the widespread panic incited by the popular crowd when the unpopular kids at school are suspected of being terrorists because apparently they’re trying to poison students one popular girl at a time and...oh yeah, they’re “different”.

That was actually the second thing that attracted my interest in this story. The first would be Emma’s voice. Every chapter opens with Emma having a little monologue with God. Nothing offensive. Just a regular teen sharing her thoughts with the Lord. That right there instantly connected me with Emma, because I’ve had a few similar monologues with God, and I couldn’t help smiling as some of the things she said to Him were like an echo of my own words. Anyhow, I also really liked Emma because she made me laugh. I don’t mean smiling or giggling, I’m talking belly-clutching, tears-rolling-down-my-face laughs. Laughs that made others stare at me as I was trying to get control over my dignity, laughs. Yep, this author nailed it with the humor. Anyone who doesn’t laugh at least once while reading this book would, in my opinion, rank right up there next to sauerkraut. Especially with the locker incident. I read it like three times, and every time it made me laugh. OK, so you get my point about the humor, right?

Darci – the Reverend’s daughter – she’s the antagonist in this story. And trust me, she’s pretty scary. Nothing freaks me out more than a two-faced, scheming, lying, pastor’s daughter with the face of an angel who is the most popular girl in school and who is loved by ninety percent of the townsfolk. In their eyes she can do no wrong. That means, anyone who has the misfortune of landing on Darci’s wrong side, don’t stand a chance. Darci and her posse rule the school, rule the town, and have all the important decision-making adults wrapped around her pinkie. So where does that leave pariahs like Todd and Emma? Emma just wants to do the right thing, but she has so much to lose if she tells the truth. While she makes up her mind about whether she should do the right thing or let a few innocent students take the fall for Darci’s elaborate scheme, she suffers one embarrassment after the other, and have her own issues to deal with such as her relationship with her mom, falling in love with her best friend’s boyfriend and the school’s Jewish outcast. This girl has to make more than one tough decision and lots of times I was happy not to be in her shoes because I had no idea what I would’ve done faced with the same dilemmas.

There’s a tiny smidgen of romance in this book, and I especially love how the author dealt with it at the conclusion. The characters – main and secondary – are all three-dimensional and each of them has a unique voice. The small-town atmosphere, and specifically the entire Faith Forward scene at the end, was done terrifically! I felt the crowd’s anticipation and got caught up in their exuberance. The conclusion was just right, and if I had written this book I wouldn’t have done it any differently. What Would Emma Do subtly presses the reader to contemplate what decisions they would make if they were in Emma’s shoes and how it would affect their faith.

I’m fast becoming a fan of Eileen Cook’s writing and I can’t wait to read more of her books. The two I’ve read thus far has proved to have substance and were refreshing in its approach to the subject matter. I’d recommend What Would Emma Do to fans of Miranda Kenneally’s books. If you have a sense of humor, appreciate sarcasm and irony, and have an open-minded view towards God, I’m positive you’ll love this clean read as much as I have!

What Would Emma Do? by Eileen Cook has 115 reviews on Goodreads. Read it here.