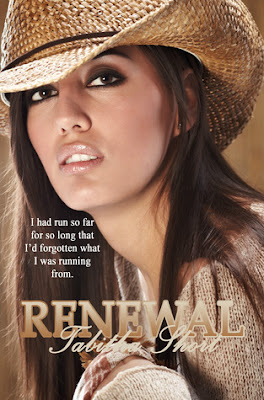 All Grace has ever done is run away. After high school, she ran to Ole Miss, a college far away from her home in Sunset, Louisiana. After college, she ran to a job in Wyoming that spared her from a life in Jackson she didn't want. Now, at twenty-nine, her husband has passed away and all she knows how to do is run, so she's run back home.

Now she must work through her loss while building a new life. First, she must repair her relationship with the younger sister she left behind. Then, she has to find a new job, which lands her dealing with an arrogant, sexist boss and a very competitive co-worker. They're the least of her problems, though. Her old college boyfriend, the one who broke her heart, is the Assistant Director. On top of that, her childhood friend, Morris, keeps showing up asking for a date and flaunting his country boy good-looks.

Going home seemed to be the right answer, but now she's tired of running. It's time for her to learn to let go, give in, and to heal. She has to learn that it's OK to remember, it's OK to hurt, and it's OK to love again. Can she convince herself to move forward? Or will the pain of her husband's death leave her unable to reach out to others?

Having only read one other short story by this author, and it being a horror at that, I’m enormously thrilled at finding that Tabitha Short can write an amazing and absolutely spellbinding tale of love, family, healing, and starting anew, as brilliantly as what she writes horror.

Though Renewal is a contemporary romance – and I honestly am not a fan of huge productions of romance in books – I loved this novel to no end because the romance was not the main focus of the story but rather an addition to Grace’s character development. I’ve read books where the main character grieves for the loss of a loved one or a spouse and the grieving was so overwhelming it left me emotionally worn-out, so I was a little reluctant to read yet another book where the protagonist has to deal with the death of her husband and then start her life all over again. I was pleasantly surprised to find that in this book, though Grace had regular tearful breakdowns and had to deal with the pain of constant reminders of the life she had with her husband before he passed away, I actually shared in her heartache without feeling overwhelmed by her emotional outbursts. Short wrote these heart-wrenching scenes really well and instead of alienating the reader from Grace’s heartache, she makes you feel like crying with Grace and wanting to console her.

What really captivated me was the intricate family dynamics in this story. Grace running away from her past impacts the lives of numerous characters. The bonds between her and her sister, Jess, the set-up and daily routine at her parents’ house and Grace’s interactions with her niece, Kylee, as well as the comparisons she drew between Brock’s treatment of her and her treatment of Morris, were absolutely compelling. The reader is made to feel comfortable and right at home in these characters’ lives, and once Grace starts at her new job, the reader is also made privy to the things Grace experiences with new colleagues and a chauvinistic boss. Grace is a highly intelligent character, comfortable with who she is, unpretentious, level-headed, and knows how to connect with others on many different levels. She stands her ground, and that’s what intrigued me about her most. It was easy to relate to her, making her exactly the type of female lead I’d like to see more of in women’s fiction.

The underlying message of accepting that sometimes things happen for a reason, is subtly and beautifully narrated throughout the story, and there were quite a few instances where I had to wipe away tears, especially where it involved the neglect of three-year-old Kylee by her juvenile father. All in all this is just one of those books where you’ll miss the characters and think about them for days after finishing the book. With rich characterization and a complex plot, Renewal is everything a contemporary romance should be and so much more! Passionate, evocative, moving, and wholly engaging; a story which refuses to be easily forgotten.

Tabitha Short is the author of many horror short stories including The Roller Coaster of Terror and The Please DO Feed The Animals ZOO. She will be releasing a new horror short in The Corpses of Old Farm Hill Road series every Halloween until 2016.
Her first YA novel, Her Sister's Murderer, published in 2012 and reached #8 on an iTunes best seller list less than 30 days later.
Her second YA novel, a high fantasy titled, Arena Games: Legend of Petrova is the first in a series and is getting good reviews.
You can purchase her books at nearly all online retailers of ebooks and in several independent book stores across the US.