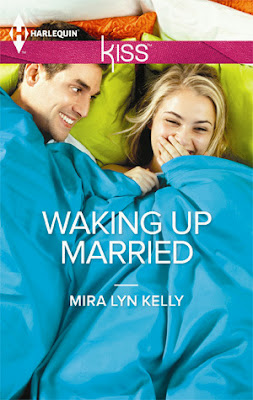 Her first thought: "Who are you?"
It's the morning after her cousin's bachelorette party in Vegas and Megan Scott wakes up with the mother of all hangovers. Even worse, she's in a stranger's penthouse having woken up with something else as well - a funny, arrogant, sexy...husband!
Up until now, finding even a boyfriend had seemed impossible - been there, got the broken heart, sworn off men for good. Then a few martinis with Carter...no, Connor Reed and she's gone from first meet to marriage in one night!
Megan wants a lawyer. But Connor's shocking bombshell?
"I don't want a divorce."

If you’ve been following my reviews, you’re probably thinking why, for the love of all that is good and holy, did I pick a romance from Harlequin Romance when I’m always carrying on about how much I dislike romance in books. Please allow me to be clearer on the type of romance I hate in books: the insta love and love triangles. Those are the two elements in romance I can’t stand. And even though I’m not a true blue romantic at heart, I do – believe it or not – have a romantic bone or two in my body. There was actually a time in my life, many, many moons ago, when I devoured one paperback romance after the other...and loved it! I’m not talking steamy romance, just swoony, googly-eyed cotton candy fluff.

With that in mind, here are my thoughts on this lovely gem from Harlequin. Firstly, it does have a few raunchy scenes, but it was done tastefully and nothing too explicit. It doesn’t come anywhere near erotica (which I DON’T read). The actual hook for me, and the reason for picking up this book, was the gorgeous cover (of course!), but mostly it was the title that got me curious. I just had to know how the heck it was possible for two people to wake up married, with one of them not even recalling they got married in the wee hours of the morning. In all honesty, it sounded like it was going to be a fun, lighthearted read, which it was, but with a more serious undertone than I expected. This is really a novel about character growth and two damaged individuals being thrown together having to learn to let go of the past and learn to trust and love (yes, Tina Turner, love’s got everything to do with it).

I loved both the main characters. Maybe I liked Connor a little bit more than Megan, but that can most likely be attributed to the fact that most of the story is told from Connor’s point of view. Nonetheless, Megan also makes the reader privy to her thoughts and feelings, and we get a deeper understanding as to why she’s willing to tackle parenting as a single mother. I’d probably have felt the same if my mother got married seven times and I got a new stepdad every couple of years. Megan’s character is a little Mary Sue-ish, but not overtly so. She’s described as a brainiac beauty, confident, modest, independent to an extreme, kind, smart, and funny.

She was a self-proclaimed recovering romantic. A woman who believed in love but had discovered through a lifetime of experience the heights of that particular romantic elevation to be beyond her reach. And she’d accepted it, wasn’t interested in the futility of an unattainable pursuit.

Connor was the real surprise, though. Probably because I imagined Colin Firth in this role (I don’t know why, it just felt like a role Mr Firth would portray perfectly). Connor is motivated, dependable, level-headed, goal-driven and unafraid of confrontation or hard work. Who wouldn’t want to fall in love with a man who has his priorities straight? But oh, wait, Connor doesn’t want love and he doesn’t want to be in love. Due to his traumatized childhood, he has endured several failed relationships and thus has become a jilted man. Sad, but true. Both Megan and Connor not wanting the commitments and strings that goes with loving someone, how will they ever make this quickie Vegas marriage work? That was the question that kept me reading right through to the end.

And once Connor had teased that trust from the tight hold of her fist...handing it over had been incredible. A heady, addictive thing. A release she’d never allowed herself to truly experience before.

As if maybe fairy tales came in varieties she hadn’t known existed. And this one was hers.

What I appreciated most from this author is that she didn’t expect me as the reader to fall in love with her characters based on how good looking they are. Yes, Connor has a solid build, and Megan is sexy as heck with her deep blue eyes, but all of this were just a mere mention in the background to give the reader an idea of what the author envisions as her characters’ physical attributes. The bigger focus was heavily placed on what these two were made of, and that on its own brought a certain depth to the story.

Waking Up Married, as you can imagine, has its fair share of sidesplitting moments. Traditionally, people get to know each other more than half a day in advance before taking the proverbial plunge. Of course, Megan and Connor isn’t your traditional couple and so they had to learn to live with each others’ quirks AFTER they got married. Yep, lots of laughter ensued. I loved peeling back the layers on both these multifaceted characters to get a glimpse of what makes them tick.

All in all, this was a terrific read. The only thing I can complain about is that every other sentence started with “Only,...”. I started counting it after awhile, but lost count near the end. It was something I picked up on, but it didn’t dampen my enjoyment of Connor’s pursuit in convincing Megan why this is a marriage worth staying in. I also enjoyed Ms Kelly’s way with words and how she turned it into a story sheer in emotion. I’d recommend Waking Up Married to anyone whose heart beats faster at the mention of the words “sweet romance”. I’m looking forward to reading more books by this author.

Waking Up Married by Mira Lyn Kelly has 1 287 reviews on Goodreads. Read it here.

(At the time of posting, this book was free on both Amazon.com and Barnes & Noble)

USA Today bestselling author Mira Lyn Kelly grew up in the Chicago area and earned her degree in Fine Arts from Loyola University. She met the love of her life while studying abroad in Rome, Italy, only to discover he’d been living right around the corner from her for the previous two years. Having spent her twenties working and playing in the Windy City, she’s now settled with her husband in rural Minnesota where their four beautiful children provide an excess of action, adventure, and entertainment.

With writing as her passion and inspiration striking at the darnedest times, Mira can always be found with a notebook at the ready. (More than once she’s been caught by the neighbors, covered in grass clippings, scribbling away atop the compost container!)

When she isn’t reading, writing, or running to keep up with the kids, she loves watching movies, blabbing with the girls, and cooking with her husband and friends.