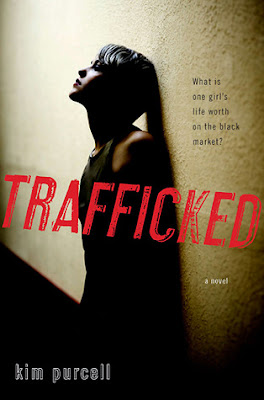 A 17-year-old Moldovan girl whose parents have been killed is brought to the United States to work as a slave for a family in Los Angeles.

Hannah believes she’s being brought from Moldova to Los Angeles to become a nanny for a Russian family. But her American dream quickly spirals into a nightmare. The Platonovs force Hannah to work sixteen-hour days, won’t let her leave the house, and seem to have a lot of secrets—from Hannah and from each other.

Stranded in a foreign land with false documents, no money, and nobody who can help her, Hannah must find a way to save herself from her new status as a modern-day slave or risk losing the one thing she has left: her life.

Trafficked is one of those books that should come with a warning. It will keep you up way past your bedtime and have you thinking about it every second of every day until you’ve finished reading it, and then some more. It is a superb read. Every emotion conceivable is what this book will bring out in you. Or at least, that’s what it did for me.

So it happened that hubby and I went on a date with all the bells and whistles, and part of the date included him taking me to my happy place – my favorite bookstore, of course - and telling me I can have any book I want. The perfect date, right? Heck yeah!  Ninety minutes later I walked out of the bookstore with a relieved, near exhausted hubby, Trafficked safely tucked under my arm, and a huge smile on my face. I don’t know what hubby had planned for us when we got home, but my shiny brand new book and I headed straight for bed. I thought I’d read one or two chapters before going to sleep, but before I knew it, the birds were chirping, the sun was rising, and I was almost halfway done with Trafficked...and loving every page of it!

This book was amazing! It was such an eye-opener and the level of research done for this novel must’ve been astounding because it shows. It doesn’t get any more real than this. I don’t even know where to start without bombarding you with all that I loved about this book. The catch-phrase on the back cover reads: “The American dream becomes a nightmare”. As appropriate as this proved to be for this novel, that statement is open to interpretation. Us privileged people would feel that Hannah was justified to feel the way she did and act in the manner she did, but others less fortunate might feel that she had it easy and would put up with Lillian’s abuse with a smile. I rooted for Hannah all the way. The treatment she endured from Lillian broke my heart into a million pieces, a million times. I hated Lillian. I seethed at the abuse she heaped on Hannah. And every time I thought I saw a little humanity pushing its way to the surface in Lillian, she’d turn around and destroy whatever goodwill I tried to feel towards her by hurling insults and unfounded accusations at Hannah. And what she did to Hannah’s hair is just atrocious, but is nothing compared to what she did to Hannah at the end. I seriously had a love-hate thing going with this character.

Sergey is an all-out enigma. It was hard to tell whether he was on Hannah’s side or what the heck fence he was sitting on. At least I liked him a lot more than I did Lillian and I kept hoping he would be Hannah’s saving grace. In a very twisted way he did save her from a lot of things, but even at the end, his actions were cowardly and selfish. I would’ve liked to know more of Sergey’s back story and his connection to Hannah’s past. It would’ve been nice if the author had taken the time to develop that line in the story a little more so I could have more compassion towards Hannah’s father and his dealings with the resistance, as well as a more sympathetic understanding of Sergey’s motives.

But let’s get back to Lillian for a moment. What made Lillian such a dangerous character – and what I’m guessing would make most women such forces to be reckoned with – is her jealousy and her insecurity about her husband having cheated on her before. That’s what I loved about all these characters. All of them had relatable motives for their actions. Not necessarily justifiable, but motives that would make any reader stop and think: how would I have reacted in such a situation? This story presents the reader with many such questions.

What fascinated me most was the contrast between the living standards in America compared to the ones in Moldova (which is near Romania in Eastern Europe for those who have no idea where Moldova is ~ it’s an extremely poor country). It was even more shocking because it is real. What we take for granted (something as simple as soft, white toilet paper, and hot water coming out of faucets) are luxuries for Moldovians. It was heartbreaking and refreshing to witness Hannah’s awe over the everyday, simple things we are so used to.

I loved the family set up in this novel. The kids were adorable, but they were more in the background and I would’ve loved to see more of the contact between them and their father. When Hannah was taken on a tour through the family’s residence on the day of her arrival, I could easily form a picture in my mind of every room, and this helped me to feel part of the story for the remainder of the book. I could even feel the stuffiness of the garage Hannah had to sleep in, in a sleeping bag on the sofa in the unrelenting Californian heat.

Hannah’s fascination and eventual friendship with the boy next door adds a tiny bit of a romantic feel to the story, but I felt it was only included as a plot device to assist in the conclusion. However, I was very relieved that it wasn’t an insta-love thing for Hannah or Colin, and that she befriended him because she needed someone to talk to, not someone to swoon over. What I also liked about it is that it introduced yet another flawed character (Hannah has crooked front teeth, Colin is overweight) and showed that even if you’re privileged and have everything you wish for, it doesn’t mean that you’re happy. The story has lots of subtle messages such as this one.

Trafficked is a wonderful book and it surprised me to no end. I felt part of this world and easily walked in Hannah’s shoes and felt the frustration she did. The writing is simplistic and uncomplicated, which works perfectly well for Hannah’s simplistic and uncomplicated character. I hated Paavo and his wife, Rena, and feared the horrible things he could do to Hannah or her family back home in Moldova. I was intrigued by the mystery of her parents’ death, Sergey and Paavo’s possible connection to them, and I was kept guessing about the disappearance of Hannah’s beloved uncle right up to the end. This is more than the average human-trafficking interest story. It is different in so many ways and it has heart. I recommend Trafficked to anyone and everyone looking for a heartfelt read that leaves you counting your blessings and appreciating everyday conveniences so much more.

So, to my lovely and very patient non-reader husband, thank you for giving me a gift that would help me remember our wonderful date for always and ever. And to Kim Purcell, keep it coming, because I definitely want to read more of your books!

Trafficked by Kim Purcell has 152 reviews on Goodreads. Read it here.

I grew up in Prince George, a small town in Northern Canada, where I did swim team, skied in the winter, water skied in the summer, and read a whole lot. After graduation, I moved to Vancouver and went to the University of British Columbia, did a bunch of traveling, met my future husband in Korea, got married and moved to LA. I wrote two "practice" novels before TRAFFICKED. We had two kids and then moved to New York City. In my spare time, I’m a swimmer, a runner and a yogi. I love to dance in empty elevators and public bathrooms if there's a good song playing, but don't tell anyone.