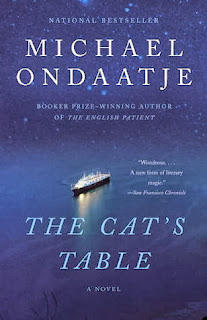 In the early 1950s, an eleven-year-old boy in Colombo boards a ship bound for England. At mealtimes he is seated at the “cat’s table”—as far from the Captain’s Table as can be—with a ragtag group of “insignificant” adults and two other boys, Cassius and Ramadhin. As the ship crosses the Indian Ocean, the boys tumble from one adventure to another, bursting all over the place like freed mercury. But there are other diversions as well: they are first exposed to the magical worlds of jazz, women, and literature by their eccentric fellow travelers, and together they spy on a shackled prisoner, his crime and fate a galvanizing mystery that will haunt them forever. By turns poignant and electrifying, The Cat’s Table is a spellbinding story about the magical, often forbidden, discoveries of childhood, and a lifelong journey that begins unexpectedly with a spectacular sea voyage.

Michael was eleven years old that night when, green as he could be about the world , he climbed aboard the first and only ship of his life, the Oronsay, sailing for England from Colombo.

Unbeknownst to him, the twenty-one days at sea would become twenty-one years of schooling, molding him into the adult he would one day be, when he joined the cat's table, the least important place to eat on the ship.

The lessons he picked up from the adult company filled up several pages of his old school exercise books. He still had time to make those notes, amid the adventures in which he and his friends, Ramadhin and Cassius, engaged in on the ship. They witnessed an adult world filled with thieves, adulterers, gamblers, teachers, authority, natural healers, dreamers and schemers. Oh yes, and a shackled, dangerous prisoner. Each one of them becomes important in their lives through either their words or conduct. The ship had lots to offer for three young boys to keep them occupied. So many people, so many stories, so many intrigue. And then there was to ports of call...

Mr. Mazappa - the boisterous, loud pianist would change their newly acquired perspective on old paintings with his approach to the angelic Madonnas in them, saying: "‘The trouble with all those Madonnas is that there is a child that needs to be fed and the mothers are putting forth breasts that look like panino-shaped bladders. No wonder the babies look like disgruntled adults."(p.213 - kindle edition)

Mr. Larry Daniels, the botanist, would teach them much more about his plants than they would ever need to know in their lifetimes.

Mr. Fonseka, the actual teacher,  had a "serenity that came with the choice of the life he wanted to live. And this serenity and certainty I have seen only among those who have the armour of books close by."

I wanted to read this book for such a long time now. There was just something about it that told me it would roll me over and tie me down in its prose. It did.  Some books just put themselves where it can be read because it is really that good. It is multifaceted. It is thought-provoking. It is excellent. It is one of those books you cannot walk away from easily. It has all the elements to promise that it will become a classic in time. I want to reread it. I just have to. Period.

The Cat’s Table by Michael Ondaatje has 1 978 reviews on Goodreads. Read it here.