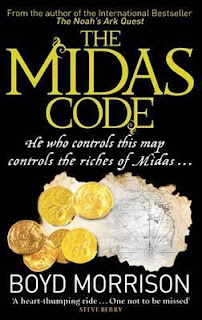 Top army engineer Tyler Locke is given a mysterious ancient manuscript. Written in Greek, it initially seems indecipherable.But with the help of classics scholar Stacy Benedict, Locke comes to understand that this manuscript could provide the clues to the greatest riches known to mankind – the legendary treasure of King Midas.However, there are others who are also hot on the trail – and it rapidly becomes a race against time to crack a code that is both fiendishly difficult and potentially deadly….A sweeping, gripping read, The Midas Code blends fascinating incidents from myth and legend with a modern plot that will have you guessing to the very last page. 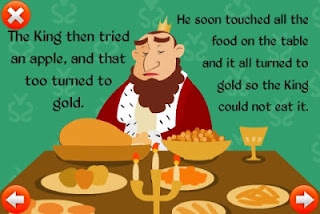 Does it ever happen to you where, after finishing a lightning-paced mystery thriller, you sit there for a few minutes thinking oh wow, while waiting for the last of the adrenaline rush to dissipate? Yes? Then you’ll understand exactly what an awesome read this is. If your answer happens to be “no”, you should definitely pick up a copy of The Midas Code to experience this thrill.

“But the Midas Touch? It was ridiculous. Everyone knew it was a myth about the corrupting power of greed. King Midas was given the wondrous ability to turn anything he touched into gold, which he initially thought was a blessing. But when his feast of celebration became inedible at his touch, Midas realized that this talent was a curse. He begged the gods to rid him of it, and they did, but not before he accidentally turned his own daughter into gold.”

Usually it takes me a day or two to finish a book. It took me a few days to get through this absolutely magnificent book. The writing is impeccable and engaging and the characters absolutely realistic. But really, the beauty of this story lies in the flawless, clever plot and the way the author brings the Midas Touch legend to life. Everyone knows the King Midas touch is only a myth, but Morrison made me believe that it could really exist and that having possession of the Midas Touch could give you the power to own the world. Using a colorful blend of science, myth, history, technology and archaeology, the author drew me into the story and got me thinking what I would do if I had the means to turn seawater into gold.

That’s not all there is to this story, though. I’m a girl who loves action movies and this is what this book is: one pulse-pounding action scene after another. Think kidnappings, dirty bombs, explosions (quite a few of those), the Italian mafia, secret codex designed by Archimedes, treasure maps that needs deciphering, underground tunnels and hidden chambers, car chases (one of them on the autobahn in high-priced vehicles), gun fights and gadgets that would get any techno-geek’s pulse racing. Now you have a tiny idea of what to expect, but trust me when I tell you this book is loaded with surprises. Plus, one of the bad guys listens to Metallica’s Enter Sandman on his iPod while inserting a detonator into a container of binary explosives. Metallica: making the bad guys’ minions look a tad more…evil.

I recommend this book for fans of Dan Brown and anyone who loves to read about hidden treasures, historical and archaeological legends, mysteries and puzzles. The Midas Code is a riveting novel that left me on a book high which lasted for hours. I already have three more books by this author on my kindle which I’m excitedly looking forward to reading. This is the second book in the Tyler Locke series, and as I haven’t read the first book, I can safely say that The Midas Code can be read as a stand-alone without having to read its predecessor, titled The Noah’s Ark Quest. Make sure to also read the “afterword” when you’re done reading this book. Lots of interesting tidbits from the author on how he created this novel.

The Midas Code by Boyd Morrison has 81 reviews on Goodreads. Read it here.

I found this weird little video with its catchy tune on YouTube which is similar to the title and theme of The Midas Code. What would you do if you had the Midas touch? Watch this video here.

One of the bad guys in The Midas Code was listening to this on his iPod while constructing a bomb. I just love Metallica!

Boyd Morrison is an author, actor, engineer, and Jeopardy! champion. He started his career working on NASA's space station project at Johnson Space Center, where he got the opportunity to fly on the Vomit Comet, the same plane used to train astronauts for zero gravity. After earning a PhD in engineering from Virginia Tech, he used his training to develop eleven US patents at Thomson/RCA. Boyd then managed a video game testing group in Microsoft's Xbox division before becoming a full-time writer. For non-fiction thrills, he enjoys white water rafting, skiing, scuba diving, and bungee jumping. Boyd is also a professional actor, appearing in films, commercials, and stage plays. In 2003 he fulfilled a lifelong dream and became a Jeopardy! champion. He currently lives in Seattle with his wife.