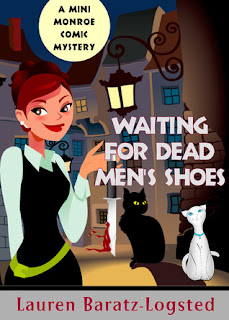 Underachiever Minette "Mini" Monroe has long dreamt of how much better life would be if only she were in charge of the world, said world being the independent bookstore in Westport, CT, where she's worked for the past half dozen years. After her beloved boss Colin Quimby is murdered, Mini gets her wish and also gets a chance to solve the case, aided by hot young Officer Michael "Mickey" Maus. Despite his unfortunate nickname - would any woman really voluntarily become part of Mini and Mickey Maus? - Mini takes a shine to him, but there's no real time for romance, not when Mini has her hands full dealing with Colin's viper's nest full of ex-wives, offspring, former business partners and current business rivals, all of whom had good reason to want to see Colin dead. Who will turn out to be the guilty party? The only way to find out is to read WAITING FOR DEAD MEN'S SHOES, a madcap comedic novel that proves that the Shakespeare Unabridged Globe and the Oxford English Dictionary are still a girl's best weapons.

Although a murder mystery should be a serious book, I laughed and giggled my way through Waiting for Dead Men's Shoes. After a day on which he annoyed an ex-wife, an ex-business partner and several members of the staff of his book store, Colin Quimby is murdered. Minette Monroe seems to be the only person and employee who is truly sad about his death and absolutely determined to find out who had caused his death. When handsome officer Michael Maus is the initial detective on the case, Mini decides that they should work together to find the murderer, never mind that he is taken off the case on the same day. They embark on an adventure that includes a funeral as a first date, breaking and entering, and sessions in the gym that is all talk and little exercise.

This cleverly written and highly humorous story just kept me turning the pages. The author uses word play as well as hilarious incidents to make the book one of the funniest I've ever read. Even the names of her characters are perfectly chosen for a comedic murder mystery. Is it surprising that Minette Monroe, called Mini, is hesitant to become Mrs. Mini Maus, wife of Mr. Mickey Maus?  The incredibly embarrassing situations Minette gets herself into made me howl with laughter.

Despite the light tone of the story, the plot is skilfully developed and the end is as unexpected as that of any of the very best mysteries.  The characters are brilliantly crafted; from Todd Blakely, the shop assistant and Fiona the first ex-wife, to Colleen the daughter from Colin's first marriage. All of them could potentially be the murderer. Add to that the spoilt daughters from the second marriage, called by Mini the Sisters Dim, and the suspect pool becomes very interesting indeed.

An excellent read, I'd call Waiting for Dead Men's Shoes a keeper to be read again and again. Five Stars and a standing ovation for this book and its fantastic author. 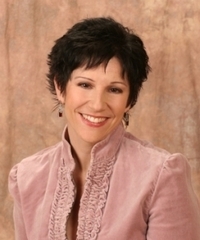 Lauren grew up in Monroe, CT, where her father owned a drugstore at which her mother was the pharmacist. She is a graduate of the University of Connecticut at Storrs, where she majored in psychology. She also has what she calls her “half-Masters” in English from Western Connecticut State University (five courses down, another five to go…someday!).

Throughout college, she worked semester breaks as a doughnut salesperson, a job that she swears gave her white lung disease from all the powdered sugar she breathed.

Upon graduation, she began work at the venerable independent spacebookseller, now sadly defunct as such, Klein’s of Westport. There, she bought and sold for the better part of 11 years.

In November 1994, Lauren left the bookstore to finally take a chance on herself as a writer. Success did not happen over night. Between 1994 and May 2002 – when Red Dress Ink called with an offer to buy THE THIN PINK LINE – Lauren worked as a book reviewer, a freelance editor and writer, and a window washer, making her arguably the only woman in the world who has ever both hosted a book signing party and washed the windows of the late best-selling novelist Robert Ludlum.

Since Red Dress Ink’s call in 2002, Lauren has been kept very busy with writing more novels and checking her Amazon ranking on a daily basis. She still lives in Danbury, with her husband and daughter, where she has lived since 1991.

In addition to writing, Lauren’s daughter keeps her busy, accounting for the rest of her time.