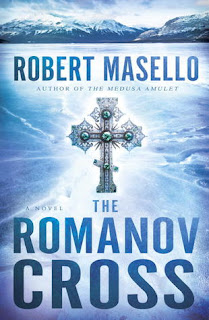 Nearly one hundred years ago, a desperate young woman crawled ashore on a desolate arctic island, carrying a terrible secret and a mysterious, emerald-encrusted cross. A century later, acts of man, nature, and history converge on that same forbidding shore with a power sufficient to shatter civilization as we know it.

Army epidemiologist Frank Slater is facing a court-martial, but after his punishment is mysteriously lifted, Slater is offered a job no one else wants—to travel to a small island off the coast of Alaska and investigate a potentially lethal phenomenon: The permafrost has begun to melt, exposing bodies from a colony that was wiped out by the dreaded Spanish flu of 1918. Frank must determine if the thawed remains still carry the deadly virus in their frozen flesh and, if so, ensure that it doesn’t come back to life.

Frank and his handpicked team arrive by helicopter, loaded down with high-tech tools, prepared to exhume history. The colony, it transpires, was once settled by a sect devoted to the mad Russian monk Rasputin, but there is even more hiding in the past than Frank’s team is aware of. Any hope of success hinges on their willingness to accept the fact that even their cutting-edge science has its limits—and that the ancient wisdom of the Inuit people who once inhabited this eerie land is as essential as any serum. By the time Frank discovers that his mission has been compromised—crashed by a gang of reckless treasure hunters—he will be in a brutal race against time. With a young, strong-willed Inuit woman by his side, Frank must put a deadly genie back in the bottle before all of humanity pays the price.

The Romanov Cross is at once an alternate take on one of history’s most profound mysteries, a love story as unlikely as it is inevitable, and a thriller of heart-stopping, supernatural suspense. With his signature blend of fascinating history and fantastic imagination, critically acclaimed author Robert Masello has once again crafted a terrifying story of past events coming back to haunt the present day . . . and of dark deeds aching to be unearthed.

When last have you read a book where the ending…no, the entire story, left you floating on an exhilarating high? When last have you read something that made you feel breathless from all the adrenaline shooting through your body after experiencing scene after scene of explosive, nail-biting action? If your answer is “not for some time”, then go get your copy of The Romanov Cross by Robert Masello and settle in for the long haul. Boys and girls, this book will keep you lost in its pages for hours!

I don’t even know where to begin to tell you how amazing and what an absolutely worthwhile read this book is. A devastating flu epidemic, an emerald cross surrounded by mystery, a ghost on a deserted island, the unforgiving Alaskan backdrop, a religious sect devoted to Grigori Rasputin, modern technology, and old graves desecrated for scientific purposes in a race against time to save present day civilization from the possible recurrence of the Spanish flu virus of 1918…all of this is only the proverbial tip of the ice berg. The Romanov Cross has layer upon layer upon layer of secrets and reveals, and one shocking discovery after the other. The best part about this whole book is that it never has a dull moment. It moves at a breakneck pace and is loaded with interesting facts and spot-on historical information. One thing that was clear as day is how superbly the author did his research for this book; and all the chapters taking the reader back to the early nineteenth century were so believably realistic, it felt as though these characters could still be alive today. To be quite honest, I’m not into historical fiction and I don’t know much about history other for that which I was taught at school many moons ago. But face it. Everyone knows who Rasputin is, right? Even if every time he is mentioned in this book the song titled, Rasputin, by Germany hit group Boney-M starts playing in your head. The author really brought Rasputin and the Romanov family back to life in an utterly realistic way. The author did a magnificent job on taking the rumor about Anastacia surviving her family’s execution in 1918 and giving it a paranormal and twisted spin to fit in with a modern day storyline. No, no, he didn’t turn Ana into a vampire. That would’ve been too cliché and predictable. He did something far better with her character, and a lot more mysterious and awe-inspiring.

This is one of the rare books where I gained so much historical knowledge (which got me so interested in the Romanov legacy I found myself clicking over to Google to get more background on these royals) and learned some interesting things about the Inuit ways and their superstitions. The author expertly blends a multitude of characters, each with their own background story, to build an unforgettable masterpiece where nothing is what it seems. The story is told from Anastasia’s point of view in early in nineteenth century, Charlie and Harley Vane – the two scumbag, yet interesting and endearing, treasure hunters, and Dr Frank Slater the epidemiologist’s point of view.

If all historical fiction books are as interesting and well-written as The Romanov Cross, I can definitely see myself reading more of this genre. And I’m sure as heck going to read more books by this author. His attention to detail is superb, and without any lengthy explanations he builds the backgrounds in which the different scenes take place, and then places the reader smack-dab in the middle of it. Although there are quite a lot of characters in this story, it is not confusing as the author smoothly transitions between scenes. Whether you’re a history buff or not, this book has something for every reader. If you’re more into action, adventure, thrills and chills, then this very engaging, brilliant read is without a doubt also for you!

I received a free copy of this book from the publisher via NetGalley, in exchange for an honest review.

The Romanov Cross by Robert Masello has 26 reviews on Goodreads. Read it here.

Robert Masello is an award-winning journalist, television writer, and the bestselling author of many books, most recently the historical thriller entitled The Romanov Cross, published by Bantam/Random House (2013).  The book has received starred reviews in both Kirkus, which praised its “delicious sense of creeping dread,” and in Publishers Weekly, which said: “Masello skillfully weaves together the story of the deaths of the Romanov family and the possibility of a new worldwide influenza pandemic . . . Toss in a pack of slavering wolves, the undead, and a chilling ending, and the result is a terrific, can’t-put-it-down read.”  To date, foreign language rights have been sold in Germany, Italy and Poland.