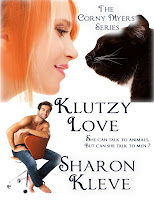 Corny is a hot chick with a great job that she loves. All that changed in the blink of an eye when her boss had an accident involving an oversized rubber band. She’s still a hot chick, but her boss is dead.

Steve Spears is a seasoned narcotics cop who ends up wanting to strangle Corny on a regular basis. After finding out Corny’s dream of opening a pet detective business, he decides he doesn’t want a girlfriend who routinely puts herself in danger. That’s his job!
Corny misses Steve, but she’s getting on with her life. She decides to get a month’s worth of dating out of the way in a single night, by combining her three favorite things—men, food, and alcohol.
Steve’s big gun and cop’s intuition saves Corny’s life, but not from another trip to the emergency room. He makes Corny promise never to get hurt again—she agreed, but has her fingers crossed behind her back.

I raised my salty-rimmed margarita, "Let's make a toast to Mr. Langfield; he was kind, kooky, and had poor taste in women."
"Here, here. God bless the silly romantic fool," Kitty cheered and twirled her hair around her finger.
"I second that," Brenda clinked her glass to ours and munched on chips and salsa.
After a sip from my drink my sexy-guy radar started to beep. I did a quick scan of the restaurant and spotted my target. I discreetly waved my hand above my head and said, "Target acquired... target acquired." We laughed until we about peed our pants and then I leaned forward and quietly asked, "Do you think he heard me?" then giggled more. "I've seen my share of gorgeous men, but that guy is smok’n hot."
"Oh boy, is he ever," Kitty and Brenda said in unison and fanned their faces dramatically.
"He's been looking my way. I'm giving him my, 'you can buy me a drink' look."
All of a sudden Kitty rolled her eyes toward the bar and whispered, "Holy moly, he's coming this way."
Sure enough he made his way through the crowd on the dance floor towards our table. Before I hyperventilated from excitement, Kitty kicked me in the shin. "Thanks, I needed that." Kitty could be pretty levelheaded in stressful situations.

Sharon Kleve was born and raised in Washington and currently lives on the Olympic Peninsula with her husband. She loves romance. She loves reading romance, living romance, and especially loves writing about romance. She gets no greater feeling than watching her characters come alive in each other's arms. Most of all, she loves giving her characters the happily ever after they deserve—with a few bumps and bruises along the way. One of her favorite things to do is picking up a new book and sinking into the story, immersing herself in the emotions between the characters. She hopes to inspire her readers the same way her favorite authors have inspired her. When not writing, she can usually be found either curled up in her recliner with her cat and a good book, or in the kitchen baking sourdough bread or bagels. 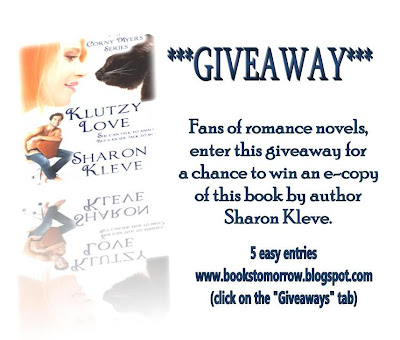 Three winners will each receive an e-copy of “Klutzy Love” by Sharon Kleve. Giveaway ends 24 November 2012.

Thank you Books 4 Tomorrow for hosting me today!

Check out my latest release, it's a Christams anthology with 4 other great authors.

It's called 'Love Under The Christmas Tree'.