Thirteen-year-old Alice Parker knows something isn't right; mysterious aches and pains, a craving for sugar that’s out of control. Suddenly she is top of the class in every subject.

Baffled by what is happening to her and feeling at odds with the world, Alice can't take much more. Only when she collapses and experiences a life-changing transformation does she discover why she is different.

But this new, incredible identity brings its own challenges and Alice isn't convinced she can rise to them. She just wants to be normal!

The fact is she's anything but...

Alice Parker has adapted well to her extraordinary new identity and abilities; she is even beginning to enjoy them.

But mysterious things are happening all around her.

People are behaving very strangely. Something or someone is controlling them – but how? Alice confronts a ruthless, relentless villain, and soon discovers his astonishing power. Where is it coming from? What makes him so different?

Disturbingly, the answers to these questions reveal as much about Alice as her sinister enemy.

Nothing, it seems, is coincidence...

Alice’s holiday starts with a surprise when she discovers a new, remarkable ability.

But her excitement is short-lived; soon she is distracted by the temptation to pursue an enigmatic mission. A local woman who died before Alice was born is believed to have left a hidden legacy.

Determined to unearth Jessie’s secret, Alice puts her trust in new friends, and comes face to face with the creatures of her nightmares.

Is she ready to deal with the enormity of what she finds? Will it help her end the reign of terror off the coast of Arcanum Cove?

One thing is certain - things are never what they seem. 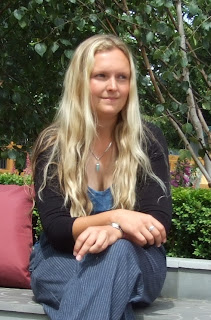 Nicola Palmer lives in a normal, semi-detached house in Warwickshire, England, writing stories for children aged 9 - 99. 'Alice Parker's Metamorphosis' is the first book in her new fantasy adventure series.
As well as writing, Nicola's other favourite things are animals, chocolate, coffee and slippers. She's also rather fond of cake and cardigans. One day she hopes to discover hidden magical powers of her own.
Book 2, 'Alice Parker & the Mind Magician’, and Book 3, 'Alice Parker & the Secret of Arcanum Cove,' are now available. Look out for Book 4 in 2013!
Unfortunately, Nicola doesn't have a magic letterbox, but she would love to be contacted at:

Three winners will each receive the complete set of all three books (e-copies) in the Alice Parker’s Adventures series by Nicola Palmer. Giveaway ends 18 November 2012.

Would love to have these books to read.