“THE CONDUIT” (The Gryphon Series)
by Stacey Rourke

All 18-year-old Celeste Garrett wants is to head off to college and make those fun, yet ill-advised, choices college kids are known for. And maybe to spend some time with the hot cameraman she just met. Instead, because of a pact her ancestors made in the 17th century with a mythical creature, she has to save the world.

While normal kids are slamming energy drinks and cramming for exams, Celeste will get her adrenaline rush fighting a fire breathing dragon. She wants to meet friends in the quad to exchange lecture notes, but first she must exchange blows with a shape-shifting demon on the rooftop. Life isn’t always fair for a superhero, but at least she doesn’t have to do it alone. With her brother and sister as sidekicks, they alternate between saving lives and getting on each others’ nerves. Together the trio encounters unspeakable odds, mystical forces and comes face-to-face with an image that will haunt them forever—their grandmother in a leopard print bikini.

Okay, little side note here. If a psychopathic killer asks if you want to see a trick, say no. That’s the smart thing to do. I, on the other hand, responded, “Bring it.”
-excerpt from The Conduit

Tired of family secrets, vampires, werewolves, sappy romance, angst-filled teens and drama queens? Did I hear you say “hell, yeah!”? Well then, boys and girls, scoot on over to Amazon and get your hands on this gem of a book. Oh and uhm, clear your schedules for the day….cause you’ll be stuck with your nose in this book for hours on end; easily forgetting about the “real” world!

This book is unlike any other YA book I’ve ever read before. Not only are the plot and mystical characters very original; it is so much fun to read! The author’s signature humor is prevalent throughout the book and the characters are hip, sassy, feisty and utterly lovable – flaws and all!! The dialogue is witty and laugh-out-loud hilarious at times, with some unforgettable one-liners that sticks with the reader long after finishing the book. All the characters - good and evil - were some of the best and most realistic I’ve ever come across in any YA novel.

Stacey Rourke definitely knows her stuff and she writes to entertain. But take away the Joss Whedon-like humor and the reader is left with a fast-moving, action-packed plot full of mystery, revelations and nail-biting suspense, some pretty scary bad-guys, and a sibling trio of ordinary “superheroes” that makes Clark Kent look second-rate.

I can guarantee you’ll enjoy “The Conduit” from start to finish. Once you’re done reading this treat, you’ll also agree that gryphon’s, dragons, glowing birds and evil soldiers turning into panthers, are much more interesting than say….sparkling, love-sick vamps? But whatever your taste in genre, Stacey Rourke’s writing will charm you off your feet!

The Conduit by Stacey Rourke has 23 reviews on GoodReads. Read it here. 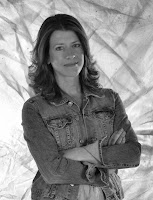 1. What would your choice of music be as a theme-song for The Conduit?

A: Wow. So many answers to that question. Demons that fear Celeste would probably say her theme song should be “So What” by Pink, a true butt kickin’ anthem. The way Celeste views herself—as a complete and total dork—she’d probably say her theme music should be “Yakety Saks.” But if I were to pick a song that to me speaks for the entire series it would be “Tura’ Lu” by the Bollox, a fine Irish song about someone that’s not quite like the rest of us…

2. How did you come up with the idea for The Conduit?

A: It all started with a dream I had. The scene at the end of The Conduit where the hand comes up out of the orchestra pit as Celeste creeps closer was my dream exactly. It was so real and powerful that I was motivated to conjure story ideas around it. I wanted a strong female main character that girls could relate to that would show them that in the face of adversity all of us can rise to the challenge and become a hero. The mythology of the Gryphon and their abilities I came up with because I wanted to venture outside the norm of the usual mystical beings and do something that hadn’t been done before.

3. How long did it take you to write it?

A: The first draft took me about a year. Polishing it up through feedback of other members of the literary community took two more years after that. Seriously. It was definitely a work in progress for a loooooong time. But all the changes and tweakings that happened were needed to get the book to a “finished” state. (Translation; it sucked before)

4. How much impact does your childhood have on your writing?

A: Tremendous. Much like Celeste my childhood and teen years were a series of mortifyingly embarrassing moments that taught me how to laugh at life. Now if I can take my experiences and weave them into stories that make people laugh I consider that a job well done. The highest compliment I can receive is for someone to tell me that my books made them laugh out loud. I love that. (Or if they compare my writing to the work of Joss Whedon. That particular compliment is like crack to me. Can’t get enough of it.)

5. Have you ever read or seen yourself as a character in a book or a movie?

A: Oh definitely, in almost every book, TV show, or movie if I truly love it I can see myself as a character. I watch Titanic I see myself as Rose (although I would’ ve found a way to get Jack on that big wooden thing with me. Just sayin.) I read the House of Night books and I see myself as Zoey Redbird. I watch The Avengers I convince myself I’m The Black Widow. But in all those cases I leave the theatre, shut the book, or turn off the TV and remember that I most likely would be the sarcastic sidekick in any situation. It’s my destiny as a smart aleck.

6. Except as yourself, which character would you want to play in a movie about your life, and why?

A: One of my kids. They mock me enough I think it’s only fair I get the chance to show them how they sound.

7. What are the most important attributes to remaining sane as a writer?

A: Wait…whatever gave you the idea I’m sane?

8. Are there any occupational hazards to being an author?

A: I occasionally get so wrapped up in story ideas I get lost in my head. My body is here, but my mind is lost in a world of my own creation. It’s a very “Please leave a message after the tone” type situation.

9. Has the dog ever eaten your manuscript?

A: As my manuscripts are on my laptop computer, no. But my laptop has in fact eaten my manuscript. I dropped it on the floor and lost everything on it. I cried, snotted on myself, pouted profusely, then learned to back everything up to a separate hard drive. Friggin’ technology.

10. What are you like first thing in the mornings before you’ve had your first cup of coffee?

A: I’m a mean and nasty troll that shall not be spoken to until the caffeine has entered my bloodstream. Failure to abide by this rule angers the beast and causes it to unleash it’s fury in a way that can make grown men cry.

11. What's the most blatant lie you've ever told?

12. What is the worst “crime” you committed as a teenager, which your parents had to punish you for?

A: Underage drinking. I was punished for this crime on more than one occasion as I am clearly not a fast learner.

13. What is your worst/best memory of high school, and why?

A: Jumping over a fence at cheerleading practice the back of my shirt got hooked on the top of the metal fencing. I was stuck dangling there with my shirt up and bra showing for the entire football team to see. I did that Barney Rumble “run without actually going anywhere” move until my shirt ripped up the back and I fell flat on my face on the track. Football players and my fellow cheerleaders alike applauded the show. I died a little inside.

A: Well I think I’m a hoot. Others may disagree. But said others can also bugger off.

A: Life in general makes me laugh. But sure fire ways to get a giggle out of me are through T-Rex short-arm jokes, Incredible Hulk humor, and people doing impromptu “snap prancing” a’ la West Side Story.

16. Any advice for aspiring writers?

A: Work at your craft. Don’t let your ego get in the way, but instead strive to learn and become the best you can be at what you do. Find your “voice”, what makes your writing unique and develop that to its fullest. Plus always remember that the literary world is subjective. What one person loathes someone else may deem a bestseller.