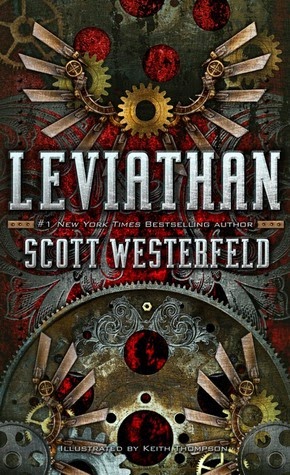 Prince Aleksander, would-be heir to the Austro-Hungarian throne, is on the run. His own people have turned on him. His title is worthless. All he has is a battletorn war machine and a loyal crew of men.

Deryn Sharp is a commoner, disguised as a boy in the British Air Service. She's a brilliant airman. But her secret is in constant danger of being discovered.

With World War I brewing, Alek and Deryn's paths cross in the most unexpected way…taking them on a fantastical, around-the-world adventure that will change both their lives forever.

A tale of adventure, Leviathan is one of those books with which I could sit back and relax. Set in an alternate 1914, the First World War is about to be fought between the Darwinist countries with their genetically altered war beasts, and the Clankers with their advanced war machines. Caught up in this are prince Aleksander, son of Archduke Franz Ferdinand and Sophie Chotek, and a young soldier, Deryn aka Dylan Sharp.

At first I thought Leviathan to be just another elaborate science fiction adventure, but by the middle of the book the characters and animals had grown on me to the extent that I didn't want the book to end. Hence, it was these brilliantly crafted characters and the excellent world building that truly kept me riveted to my chair. Deryn Sharp, posing as a boy, does justice to her surname. She is sharp, witty, brave and truly cute in an enchantingly innocent way.

Alek, on the other hand, is more serious and must make multiple adjustments when his life changes from that of a prince to that of a fugitive. His protectors, count Volger and Otto Klopp, are characters whom I wish I knew in real life; they are that well crafted and realistic.

Despite their status as soldier and prince, both main characters still have a youthful innocence and playfulness in them. This is wonderfully refreshing as so many young adult authors tend to make their characters too serious and adult for their fictional age.

Add to this interesting mix of personalities the inventive, slightly mysterious Dr. Barlow and her pet Thylacen, Tazza, and the cast of characters in this book becomes quite unforgettable.

The author does magnificent world building in this book. On the Darwinist side and therefore Deryn's world, we get to meet wolf/tiger crossbreds called tigeresques, and message-carrying lizards and parrots that get their messages mixed up. On the fighting front there are bats that eat darts so that they can shoot hostile airplanes with them, and strafing hawks that catch planes in nets. The main focus of this book, however, is the flying beasties, as Deryn calls them, with their life support system of numerous accompanying animals.

On the Clanker side, war machines like the two-legged stormwalker and the multiple legged dreadnoughts and frigates, as well as airplanes and airships, threaten the lives of the Darwinist beasts.

Leviathan is a lovely, clean book of fantasy, science fiction and adventure that I want to recommend to readers of all ages.

Scott Westerfeld is a New York Times bestselling American-born author of YA sci-fi literature. He was born in the Texas and now lives in Sydney and New York City. In 2001, Westerfeld married fellow author Justine Larbalestier.
His book Evolution's Darling was a New York Times Notable Book, and won a Special Citation for the 2000 Philip K. Dick Award. So Yesterday won a Victorian Premier's Award and Midnighters 1: The Secret Hour won an Aurealis Award. Peeps and Uglies were both named as Best Books for Young Adults 2006 by the American Library Association.