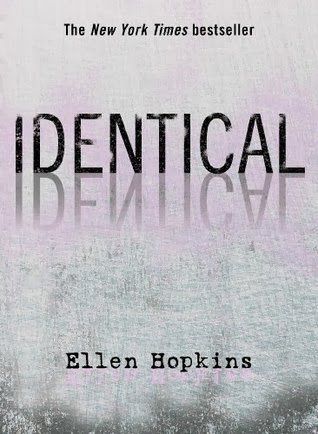 Kaeleigh and Raeanne are identical down to the dimple. As daughters of a district-court judge father and a politician mother, they are an all-American family -- on the surface. Behind the facade each sister has her own dark secret, and that's where their differences begin.
For Kaeleigh, she's the misplaced focus of Daddy's love, intended for a mother whose presence on the campaign trail means absence at home. All that Raeanne sees is Daddy playing a game of favorites -- and she is losing. If she has to lose, she will do it on her own terms, so she chooses drugs, alcohol, and sex.
Secrets like the ones the twins are harboring are not meant to be kept -- from each other or anyone else. Pretty soon it's obvious that neither sister can handle it alone, and one sister must step up to save the other, but the question is -- who?

Identical captivated me in a way that few books do. With a politician mother running for congress, a district court judge father, and a disaster, as well as some dark secrets in their past, the identical twins, Kaeleigh and Raeanne, are materially provided for but emotionally lack attention, love and family unity. Each has her own way of dealing with this unsatisfied need.

All the characters in this book are masterfully crafted. Raeanne, with her stormy personality, looks for solace , satisfaction and the ability to just feel something in drugs, painkillers, alcohol, and sex. Although she craves her father's attention, even if it means also being molested, she is protective of her gentle, good-girl sister.

Kaeleigh, on the other hand, is frightened of this abusive father and tries to please him. In an effort to feel anything more than dirty and damaged, Kaeleigh binge-eats and mutilates herself. Her boyfriend, Ian, seems to be the one stable constant in her life. Despite his very obvious love for her she finds it difficult to believe that love can mean anything other than what her abusive, controlling father does to her.

The author brilliantly develops her characters throughout the story. The huge surprise and ultimate climax of the tale is kept back for the last twenty percent.

Identical is a wake-up call to parents who place career and status before family, to mothers who turn a blind eye to their daughters being molested and to children who keep quiet about such problems in their homes. Although this realistic, emotionally written story may upset sensitive readers, it is definitely going on my to-be-read-again-and-again shelf.

Ellen Hopkins lives in Carson City, Nevada, with her husband and son. Hopkin's Facebook, Twitter, Tumblr and Pinterest pages get thousands of hits from teens who claim Hopkins is the "only one who understands me".

Like most of you here, books are my life. Reading is a passion, but writing is the biggest part of me. Balance is my greatest challenge, as I love my family, friends, animals and home, but also love traveling to meet my readers. Hope I meet many of you soon!