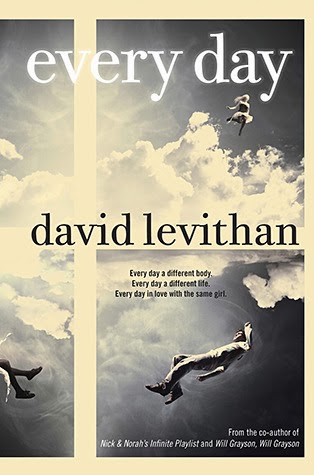 There’s never any warning about where it will be or who it will be. A has made peace with that, even established guidelines by which to live: Never get too attached. Avoid being noticed. Do not interfere.

It’s all fine until the morning that A wakes up in the body of Justin and meets Justin’s girlfriend, Rhiannon. From that moment, the rules by which A has been living no longer apply. Because finally A has found someone he wants to be with—day in, day out, day after day.

Imagine living a different life in a different body every single day. This is A's fate. Switching every night at 12 from one 16 year old's body to another's, he lives the lives of addicts, diabetics, and geeks. From a school going kid in a normal family and a day in the life of a servant girl; to sibling rivalry and romantic relationships; A gets to experience it all, but just for a day at a time. That is highly unsatisfying until one of the aforementioned romantic relationships becomes personal. Now A's life is full of a joy he thought he'd never know and yet sadder and more impossible than ever.

It was so refreshing to read a paranormal book which is completely different from anything I've ever read before. Although A is just a personality with no substance, he/she has excellent moral values. A wants to make a difference in the lives of troubled teens but he has a strong policy of non-interference. When he tells Rhiannon the truth about himself, they find ways between the two of them to save a life.

With A being in another body and in another place each day, the main tension in this book came from guessing and worrying about how he would connect with Rhiannon on a specific day. The main concern in the end, however, is how A and Rhiannon would resolve their relationship.

Through A's eyes the reader gets a look at the varied lives teenagers lead today. Loved by some parents and/or siblings and abused by others; sometimes the popular kid at school and sometimes the bitchy girl, A's existence paints a colorful picture of modern American life.

When A ends up in the body of a very obese boy and Rhiannon seems to find him less appealing than on other days in other bodies, it becomes apparent how much physical appearance count in most relationships. This book is all about the value of love as a mental and emotional state rather than a physical experience; an experience that doesn't necessarily acknowledge the boundaries of gender. Although Every Day is not a tearjerker, it is a very emotional read and I would advise sensitive readers to keep the Kleenex close.

I highly recommend Every Day as a very satisfying read that will touch the hearts of old and young but especially that of the romantically minded.

David Levithan (born 1972) is an American children's book editor and award-winning author. He published his first YA book, Boy Meets Boy, in 2003. Levithan is also the founding editor of PUSH, a Young Adult imprint of Scholastic Press.