REVIEW: MY DATE FROM HELL (The Blooming Goddess Trilogy, #2) by Tellulah Darling 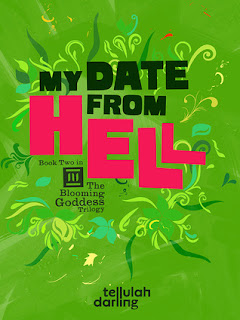 Sophie Bloom’s junior year has been a bit of a train wreck. After the world’s greatest kiss re-awakened Sophie’s true identity as Persephone (Goddess of Spring and Savior of Humanity), she fought her dragon-lady guidance counselor to the death, navigated mean girl Bethany’s bitchy troublemaking, and dealt with the betrayal of her backstabbing ex, Kai (sexy Prince of Darkness). You’d think a girl could catch a break.

With Zeus stepping things up, it’s vital that Sophie retrieve Persephone’s memories and discover the location of the ritual to stop Zeus and Hades. So when Aphrodite strikes a deal that can unlock Sophie’s pre-mortal past, what choice does the teen goddess have but to accept?

The mission: stop media mogul Hermes from turning Bethany into a global mega-celebrity. The catch? Aphrodite partners Sophie and Kai to work together … and treat this suicide mission as a date. Which could work out for Sophie’s plan to force Kai to admit his feelings for her–if she doesn’t kill him first.

Add to that the fact that BFF Theo’s love life and other BFF Hannah’s actual life are in Sophie’s hands, and suddenly being a teenager—even a godlike one—seems a bit like … well, hell. Whatever happened to dinner and a movie?

The YA romantic comedy/Greek mythology fireworks continue to fly inMy Date From Hell. Love meets comedy with a whole lot of sass in book two of this teen fantasy romance series. Breaking up is easy; dating is deadly.

I was so excited to start reading the sequel to My Ex from Hell, it was totally worth the wait! I had no idea how Tellulah Darling was going to improve on the first book, but boy oh boy, she surprised me to no end. From the get go, with a recap of the previous book aptly titled The Cheat Sheet to my Life Thus Far, laughs abound in this fantasy adventure novel.

If you’ve enjoyed the first book, you’ll love My Date from Hell. That I can assure you. The plot moves at an incredible pace and the story hardly allows the reader time to take a deep enough breath before plunging into the next action sequence. The romance between Sophie and Kai heats up, and if that’s a plus point for me (who isn’t one for romance in books), then it should give you a pretty good idea of what to expect. The lighthearted tone throughout this novel adds to the enjoyment thereof and keeps the story flowing. But of course, the real star of the show is our lovely protagonist, Sophie, who is the personification of brave and witty. I absolutely adore her character. And as much as she shines in her role as innocent-bystander-thrust-into-the-middle-of-a-supernatural-war, many secondary characters – especially Sophie’s friends – help make this book a hit.

As per what I’ve grown accustomed to in My Ex from Hell, this sequel sure doesn’t disappoint. The writing is clever and concise, the dialogue is natural, and the characterization for each character is realistic and believable. Tellulah Darling sets the bar high for the next book in this series and I’m even more excited than I was before to read more from this author. I’d recommend My Date from Hell to anyone looking for a read that would make them laugh, take them on a mindboggling fantasy adventure and leave them feeling as good as when coming off an adrenaline-pumping theme-park ride. Just in case I wasn’t clear enough before, I’m saying you should get the first book and this one and add both to your to-read list asap!

My Date from Hell by Tellulah Darling has 43 reviews on Goodreads. Read it here. 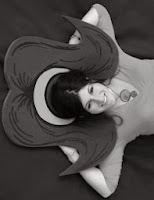