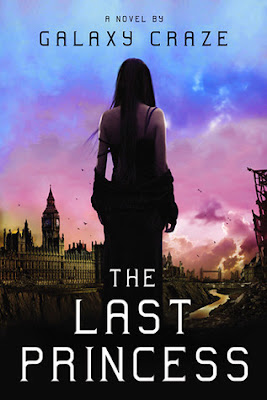 A series of natural disasters has decimated the earth. Cut off from the rest of the world, England is a dark place. The sun rarely shines, food is scarce, and groups of criminals roam the woods, searching for prey. The people are growing restless. When a ruthless revolutionary sets out to overthrow the crown, he makes the royal family his first target. Blood is shed in Buckingham Palace, and only sixteen-year old Princess Eliza manages to escape. Determined to kill the man who destroyed her family, Eliza joins the enemy forces in disguise. She has nothing left to live for but revenge, until she meets someone who helps her remember how to hope-and love-once more. Now she must risk everything to ensure that she does not become... The Last Princess.

I’m tired of dystopian novels but it seems I went through a phase where I accumulated post-apocalyptic books like nobody’s business, and now I’m stuck with it and have to read them all. Luckily for me this turned out to be a surprisingly good book.

I didn’t really connect with any of the characters, because there wasn’t much opportunity to really get to know any of them, other than making the distinction of which characters fought on which side of the battle lines. The good guys were really good and the bad guys were caricatures of the evil villains we find in every other movie. But, I really liked Eliza and her siblings, Mary and Jamie. What I didn’t like is that it’s never explained why the bad guy has it in for the royals. Yes, he offered a flimsy excuse to Eliza of his motives, but once it is proven later in the story that that isn’t the real reason why Cornelius wants to be king, no other explanation was ever offered to satisfy my curiosity.

This is the first dystopian novel ever I’ve read which takes place in England and Scotland respectively. That is one of the main reasons I enjoyed it so much. For some reason this author managed to do something no other author whose dystopian novel I’ve read this far, managed to do. Craze made this English dystopian setting feel realistic and possible. For a welcome change the world didn’t end by some unexplainable virus, plague or war. Though the Seventeen Days natural disasters felt a little over the top, I rather appreciated this ending to the world, to the usual.

The reason I don’t give it a solid five-star rating is because of three reasons. First, before reading this book, throw all logic out of the window. If you, like me, are going to ask questions about elements and happenings in Eliza’s world, you’re not going to enjoy this post-apocalyptic novel. Don’t expect things to make logical sense. Secondly, the “twists” and “reveals” can be spotted a mile away. Well, I saw it coming a mile away. That predictability sort of dampened my enjoyment of this original tale just a tiny bit. Lastly, a lot of the scenes – especially the execution scene – felt a little rushed. I don’t know if there is a sequel in the works, but I for one would like to know what happened to Portia and her two sidekicks, and to Vashti. I’m definitely not on the series bandwagon, but I have to admit that because the story is rushed in so many places and some parts of it are mostly skimmed over, this would’ve actually worked better as, at the very least, a trilogy.

This is not a book I’d recommend to readers looking for swoony romance. I was more than happy to find that the romance in this story was so miniscule, it’s hardly worth mentioning. It was used more as a plot device to get Eliza out of sticky situations, than to move the plot along. Needless to say, I was overjoyed to read a book where the romance was pretty much non-existent (which just proves my point that a book can work very well with little to no romance in it).

Compared to a multitude of dystopian novels, The Last Princess offers the reader something different. I’m always complaining that dystopian novels are all the same, but I was delighted to find that this quick read – which I finished in a couple of hours – had elements I haven’t come across in other dystopian novels. I highly recommend it to fans of the dystopian genre looking for something slightly different, and to those who like their heroine to kick butt and rise as the justly deserving victor after she has been put through hell.

The Last Princess by Galaxy Craze has 402 reviews on Goodreads. Read it here.

Craze told an interviewer that she "didn't say I wanted to be a writer, I just knew that's what I like to do." Another interviewer described her "beauty (as) a quiet, dreamy, and ethereal sort."