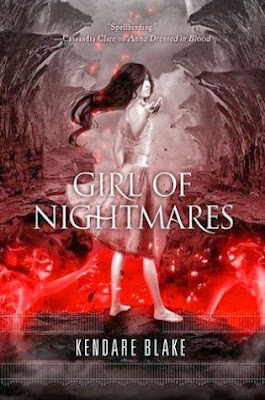 It's been months since the ghost of Anna Korlov opened a door to Hell in her basement and disappeared into it, but ghost-hunter Cas Lowood can't move on.

His friends remind him that Anna sacrificed herself so that Cas could live—not walk around half dead. He knows they're right, but in Cas's eyes, no living girl he meets can compare to the dead girl he fell in love with.

Cas doesn't know what happened to Anna when she disappeared into Hell, but he knows she doesn't deserve whatever is happening to her now. Anna saved Cas more than once, and it's time for him to return the favor.

The very last thing I expected from this book is that the finale would have me in tears. It was unexpected, and I cried unashamedly. But wait, let me start at the beginning.

I read Anna Dressed in Blood earlier this year, and although I was impressed with her story and completely in awe of Kendare Blake’s writing, I wasn’t really planning on reading the second book. But, after a couple of months, I caught myself constantly thinking of Anna, curious as to what was next for her and Cas. So, I got my copy of Girl of Nightmares and as with the first book, it was off to a slow start and after six chapters I was wondering whether I really wanted to continue with the second book. Cas was so depressing and depressed months after Anna’s exit with the Obeahman; he struggled to move on with his life; and his gloom and doom attitude was such a crushing weight, I found myself reading my copy of Girl of Nightmares with my shoulders hunched.

So...what to do? Should I soldier on, or should I quit while I’m still ahead? I chose to soldier on, and gosh am I glad I did. Halfway into the story you couldn’t tear me away from this book even if my life depended on it. And now that I’m done, I get why the author took her sweet ol’ time laying down the foundation for the ending. It needed to be done and she did it exceptionally well. In this sequel to Anna Dressed in Blood, we see a whole other side of Cas. He is more grown-up, and more determined than before to do what he believes is the right thing. He’s sole focus is to bring Anna back from wherever it is the Obeahman took her, because he believes that she doesn’t deserve the punishment she’s receiving. Now, if you think about it, having murdered many a-hapless victim over the centuries, Anna deserves to be in hell, but because she saved Cas from the torturous death the Obeahman had planned for him, Cas feels that Anna’s punishment shouldn’t be that severe. So off he goes, trying to find out how he can save Anna from her never-ending hellish fate. But as many of us know, the path to redemption is filled with uncountable obstacles.

Like I said earlier, only halfway into the story did it really get its hold on me. It started when Thomas and Cas set off for London. Up until that point, a lot of interesting things happen to Cas and Thomas, and the questions kept piling up. Morfran was being his usual self with his vague answers that only led to more questions, and Gideon wasn’t as forthcoming with the necessary information either. But the real piece de resistance was the introduction of Cas’s possible future nemesis, Jestine. Now there’s a British babe with spunk. I’m guessing we’re not supposed to like her, but like Cas, Thomas and Carmel discovers, it’s nearly impossible not to like Lara-Croft’s-double Jestine. She saves their behinds on more than one occasion, but something about her raises my hackles.

One of my favorite scenes in the second half of this book is the time when Cas, Thomas, Carmel and Jestine have to travel through the Suicide Forest on their way to the Order’s headquarters. The Blair Witch Project looked like The Sound of Music compared to what Cas and co had to deal with in that forest. It still gives me the chills thinking about it. Speaking of ‘co’. Kendare Blake did an outstanding job with Thomas and Carmel’s characters in this book. The friendship bonds between them and Cas tightens, and the price they pay for being friends with him is brought to the forefront. Even though they don’t agree with Cas about bringing Anna back, they’re still willing to make sacrifices and risk their lives to help Cas be reunited with his dearly departed true love. Who said friends are a dime a dozen, I ask you?

Thomas and Carmel’s relationship also goes through a bit of a hitch, but again, this had to happen. It all makes sense later in the story. You see, the first half of the book was too slow for my liking, but that was because the author took the time strengthening this trio’s resilient friendship which became the foundation on which Cas built his trust in Thomas when he selected him to be his anchor during the ritual where Cas had to go to the other side to get Anna. Sometimes it’s worth it to stick it out till the end so as to understand that the lengthy character development in the first half of the book was necessary because it would play a crucial role in the last half of the story.

If you’ve read Anna Dressed in Blood and you’re wondering if the second book will be as fantastic as the first, rest assured, it’s definitely worth the read. Kendare Blake has comfortably settled into her role as author, and her writing, world building skills, and storytelling is even better than in the first book. It is clear as day she knows her characters inside out, and she knows where she wants them to go. Girl of Nightmares is laden with suspense, chills, and twists (and other terrifying things) that creep up on you when you least expect it. I won’t hesitate to read any book by this author, and now I’m also looking forward to reading her newest novel, Antigoddess.

Warning: for those sensitive to profanity, the f-bomb gets dropped quite a lot in this sequel to Anna Dressed in Blood.

Girl of Nightmares by Kendare Blake has 1598 reviews on Goodreads. Read it here.

Kendare Blake grew up in the small city of Cambridge, Minnesota. She is a graduate of Ithaca College, in Ithaca, New York and received a Master of Arts in Creative Writing from Middlesex University in London, England. She loves to travel, is an advocate for animals, and cheats a lot when she plays Final Fantasy. Adopted from South Korea at the age of seven months, she arrived with the following instruction: "Feed her chocolate." Though not medically advisable, she and her parents are eternally grateful for this advice.