GUEST REVIEW: THE BODY ON THE T by Mike Martin 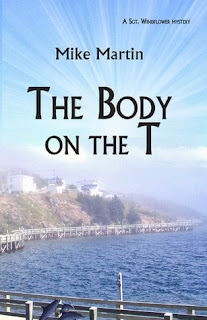 The Body on the T is the second book in the Windflower mystery series and it follows up on the highly acclaimed premiere, The Walker on the Cape. The story begins when a body washes up on a beach near Grand Bank, Newfoundland. There is no identification on the body and few clues to identify who the person was or where they came from. The case becomes the responsibility of Sgt. Winston Windflower of the Royal Canadian Mounted Police and his trusted side-kick, Corporal Eddie Tizzard.

But this is just the beginning. There is also a devastating accident on the highway and another suspicious death to deal with. Throw in a rogue police officer and an international drug ring operating in the waters off the coast and Windflower’s peaceful world is turned upside down. This time Windflower’s adventures take him to the scenic town of Burin where Captain Cook once patrolled the waters looking for French mercenaries. And to historic St. John’s where he faces down an armed suspect on a parking garage rooftop in the midst of a busy downtown evening.

Along the way Windflower also continues to enjoy the food and home-style hospitality of this part of the world. Cod tongues, pan seared scallops and even figgy duff become part of his diet, and his long list of favourite foods. Windflower may be a long way from his Cree home in Northern Alberta but he has found a new place to love in the fog and mist of Newfoundland.

Grand Bank, southeast coast of Newfoundland Canada. This is the little part of heaven where RCMP Sergeant Winston Windflower, his girlfriend, Sheila Hillier, his sidekick , the incessant chattering Corporal Eddie Tizzard and his other interesting friends get to spend a quiet uncomplicated life.

Their days are filled with culinary delights, chess- and card games and generally as little trouble as possible. But that was before a body is discovered on the T and a fortune cookie promises him exciting times ahead. With the cod fish industry going belly up, a few people in town have to find other ways of keeping the peanut-butter cheesecake affordable and on the menu for many, and their conduct promises to give a totally different meaning to the concept of exciting times...

For some people, trouble is their comfort zone, and where there aren't any, they create it in any which way they can. After all, a little bit more trouble can bring a little bit more monetary cushioning in their lives. They are a bunch of characters that would stir the pot considerably for Winston Windlfower: people such as Claude Lapierre; Roger Buffet; and Ernie Daley, the slime bucket, who does not mind the "hoccupational azzards" his aspirations would incur; and the mayor, Francis Tibbo, waddling in on the action, sputtering "What is going on in this community, Sergeant? Dead bodies being found by children as they play on the beach? A well-known community member dragged out of the water? People want answers, I want answers!" His attempt at righteous indignation came across as shrill and fatuous. Francis Fatuous. It fits indeed.

From then on, not only the cod tongues gets steamed up, or fried, with scallops on the side, dished out with a rosé sauce made of tomatoes, fresh, cream, black pepper, onions, and some Parmesan cheese. Like the cod and vegetables forming a scrumptious community on the plate, the people of Grand Banks are in for a serious drill on the grill of bad intentions and good guys stepping in to save the day in a thrilling adventure along the beautiful coast lines of Newfoundland. Nothing will ever be the same.

Like the sauce, the story promises to be just as tart and tangy. Exhilaration and drama drives this easy, decent read. It is a fast read, yet slow enough to include a complete image of life in Grand Bank Newfoundland. The detailed scenery, the history, dialects, recipes and many more information in the plot- building ensure that this is undoubtedly a feel-good read.

I recommend this book to the reader who enjoys a good story that would not spread gut and gore all over the ocean floor. It is clean, fresh and perfectly spiced. 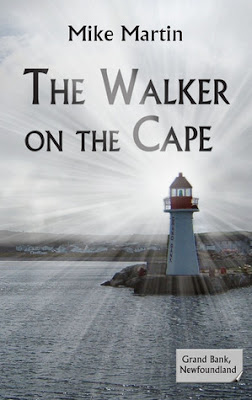