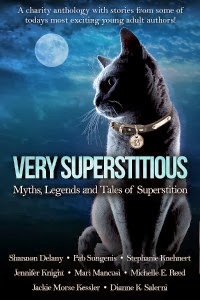 Shannon Delany has written stories since she was a child. She began writing in earnest when her grandmother fell unexpectedly ill during a family vacation. In 2008 her greatly abbreviated version of 13 to Life (written in just five weeks) won the grand prize in the first-ever cell phone novel contest in the western world through Textnovel.com .

Shannon was thrilled when St. Martin’s Press offered her a contract for a series about her 13 to Life characters. She expanded on the cell phone novel version, adding the subplots and characters she didn’t have time to during the contest. As paranormal as werewolves seem, the grief Shannon used to build Jess’s character is something she personally experienced with the loss of her own mother. Focusing on Jess and Pietr’s story of loss, love and dramatic and dangerous changes, Shannon came to better grips with her own struggle. The resulting novel has earned her blurbs from authors she respects most.

The first novel in Shannon’s YA paranormal series, 13 to Life, debuted June 22, 2010, and was followed by Secrets and Shadows, Bargains and Betrayals, Destiny and Deception, and the Rivals and Retribution (August 2012).

Shannon has also debuted with interactive science fiction in her short story ("To Hel and Back") for Spirited: 13 to Haunting Tales (Leap Books) and will make her high fantasy debut with Month 9 Books' charity anthology titled Two and Twenty Dark Tales (October 2012, "Pieces of Eight" with musician Max Scialdone).

Previously a teacher and now a farmer raising heritage livestock, Shannon lives and writes in Upstate New York and enjoys traveling to talk to people about most anything.

Pab Sungenis
Born in the swamps of Southern New Jersey, PabSungenis developed a childhood fascination with cartooning and drew a daily strip for his own amusement for two years before realizing he couldn’t draw. He wound up in broadcasting, worked for numerous stations including WSBU, WOND, WMGM, WSKR, WBNJ, WWBZ, and WKTU. He describes his drawing ability as like that of “a mentally challenged rhinoceros on a Ny-Quil bender”, but thanks to the wonders of photo-manipulation and computer image editing, on February 8, 2006 he found himself creating The New Adventures of Queen Victoria, which has appeared ever since, first on Comicssherpa.com., and now in online syndication with gocomics.com. PabSungenis is available for quotes, signings, video or podcast appearances, and all opportunities relative to SIDEKICK: THE MISADVENTURES OF THE NEW SCARLET KNIGHT.

Jennifer Knight
Hi. I’m Jen. I am twenty-two years old and live in Miami, Florida with my family. I’m a lifelong lover of books, romance and anything even vaguely supernatural. Except zombies. Zombies scare me.

I started writing in college after trying and failing to find a major. It was all I really knew how to do and since school was going nowhere, I threw myself into it. I wrote my first book in a matter of months and watched it go up in flames.

Smoldering, but still determined to make this writing thing work, I moved on to something completely different. Werewolves! Love them. Who doesn’t? I wrote the first draft of Blood on the Moon in about two months, during which I locked myself in my room and thought about teeth and moons and kissing.

I must have done something right, because Running Press bought my book and now you’re here reading this. I guess that means you liked the book. Yay! If I had a cookie, I’d totally give it to you. You deserve it.

Anyway, now that Blood on the Moon is done, I’m writing the sequel. And also some other stuff that hopefully you’ll see one day.

Mari Mancusi
Mari Mancusi used to wish she could become a vampire back in high school. But she ended up in another blood sucking profession --journalism -- instead. Today she works as a freelance TV producer and author of books for teens and adults.

When not writing about creatures of the night, Mari enjoys traveling, cooking, goth clubbing, watching cheesy horror movies, and her favorite guilty pleasure--videogames. A graduate of Boston University and a two time Emmy Award winner, she lives in Austin , Texas with her husband Jacob, daughter Avalon and their dog Mesquite. You can find Mari online at www.marimancusi.com orwww.bloodcovenvampires.com.

Michelle E. Reed
Michelle was born in a small Midwestern town, to which she has returned to raise her own family. Her imagination and love of literature were fueled by a childhood of late nights, hidden under the covers and reading by flashlight. She is a passionate adoption advocate who lives in Wisconsin with her husband, son, and their yellow lab, Sully.

Jackie Morse Kessler
Jackie Morse Kessler grew up in Brooklyn, NY, with a cranky cat and overflowing shelves filled with dolls and books. Now she’s in Upstate NY with another cranky cat, a loving husband, two sons, and overflowing shelves filled with dragons and books (except when her sons steal her dragons). She has a bachelor’s degree in English and American Literature, and yet she’s never read any Jane Austen (with or without zombies). She also has a master’s degree in media ecology. (The living study of technology and culture. Which is cool, but she still can’t figure out how to use Tweetdeck.)

Jackie spends a lot of time writing, reading, and getting distracted by bright and shiny new ideas. (She just came up with a new idea right now.) She has a weakness for chocolate and a tendency to let her cat take over her office chair.


Dianne K. Salerni is a fifth grade teacher by day and a writer by night. She's the author of YA historical novels, We Hear the Dead (Sourcebooks) and The Caged Graves (Clarion/HMH), and a forthcoming MG fantasy series, The Eighth Day (HarperCollins 2014).

The Caged Graves is a Junior Library Guild Selection, and We Hear the Dead was the inspiration for a 10 minute short film, The Spirit Game, which premiered at the 2013 Cannes Film Festival.http://vimeo.com/64738099

In her spare time, Dianne is prone to hanging around creepy cemeteries and climbing 2000 year-old pyramids in the name of book research. 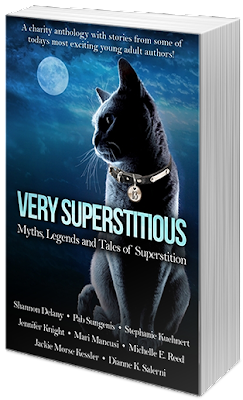 To stand a chance to win any of the below prizes, just fill out the rafflecopter! Here’s what you can win:

- An e-book of each author’s work. (Int)
- A print copy of Very Superstitious: Myths, Legends and Tales of Superstition. (US)

Great book for this time of year. Thanks for hosting the giveaway. Have a great day.

I'm not usually very superstitious but I try to never walk under an open ladder. I always but always go around.

i try not to break any mirrors i have enough issues with bad luck lets not add 7 years.

Not really superstitious, but when I break mirrors, I always say, "ah! 7 years bad luck!" lol

I really like books that deal with superstitious themes.

Looking forward to it!
Great time for the giveaway!
Happy Halloween and Thanks for the chance!