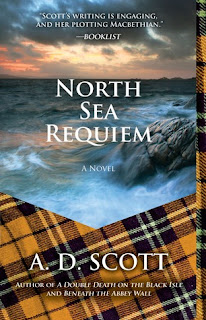 When a small-town Scottish woman discovers a severed leg in the boot of one of the local hockey players’ uniforms, it’s a big scoop for theHighland Gazette. But reporter Joanne Ross wants a front-page story of her own, and she hopes to find it in Mae Bell, an American jazz singer whose husband disappeared in an aircraft accident five years ago and who is searching the Highlands for her husband’s colleagues.

Things take a very sinister turn when Nurse Urquhart, who dis-covered the limb, suffers a hideous and brutal attack. Even stranger, she was the recipient of letters warning her to keep her nose out of someone’s business—letters that Mae Bell and the staff of the Highland Gazette also received. What could it all mean?

Unfolding against a gorgeously rendered late 1950s Scottish countryside,North Sea Requiem captures the mores and issues of another era, especially in Joanne Ross—a woman wrestling with divorce, career, and a boss who wants to be more than just her superior. The result is a poignant, often haunting mix of violence, loss, and redemption in a narrative full of unnerving plot twists and unforgettable characters.

This is the fourth book in the acclaimed mystery series evoking the mores, values and people of the Scottish Highlands of the 1950s.

Nurse Urquhart discovered a severed leg in the washing coming from the shinty team after their Saturday match against a rival town. Sundays was a forbidden day for washing and she was upset about this sunny day going to waste when time was limited. She pulled the muddied and bloodied shorts and shirts out of the container and let out a scream who had her husband, the trainer of the local shinty team, fainting.

The news splashed all over the front page of the newspaper, about the foot in the shinty boot, had the town talking the hind legs of the donkeys. For some inhabitants in the laid-back quiet town in the Scottish Highlands it was a sick prank, yet for others it would become the opening salvo for a chain of events that would divide the town, lead to murder, introspection, new discoveries, redemption and perhaps happiness.

The town was ruled by a bleak God, who was suppose to be the father of a loving Son, who resided in buildings with high walls, built with unforgiving stone, worshipped by unforgiving people and preaching the Gospel according to men.

Joanne Ross, a soon to be divorcee, wanted to prove that she can be a real news reporter, write more than just school events, church happenings and recipes for plum duff puddings. She wanted to liberate herself from a society who regarded women as mothers, not persons with dreams and thoughts of their own.

The appearance of Mae Bell, seeking more information about the death of her husband Robert, had Joanne brewing like a volcano seeking a place and time to explode. Her inner rebellion was fueled by the staunch believe of the male society that real women arranged everything, was always right, paid the bills, did the washing, the ironing, the shopping, the cooking, remembered everyone's birthdays, anniversaries, funerals, as a good wife should. In the men's eyes, that was how good women expressed love. Those who refused, or chose another way of expressing themselves were dealt with the right way, the justified way: physical abuse and/or rejection. Would she trust men again? Can she believe in love? Does it really exist?

Mae Belle represented everything Joanne wanted to be: confident, elegant, well-traveled, mysterious. But what was she hiding?

Only the police and the staff of the Highland Gazette were eager to get behind the sinister message and would lead to a lot of leg work to keep the investigators running for their money ...

I was in a little bit of a dwam myself after being drawn into the kurfuffle of solving the mystery. The story and characters were so real, so possible, so familiar, apart from the delightful introduction to Scottish words and customs. The narrative is a mystery, leading the reader through a maze of suspicions - exhilarating thoughts - of who's-dunnits' as well as added elements to throw us off the track. It was highly successful! And of course I was half-right half-wrong in the end, leaving me sneaking away tail between the legs! The conclusion was highly dramatic.

My thoughts on why it is a four-and-half and not a full five star read: The story is overall predictable in the sense that the recipe is the same for most of the books in this genre.Everything happens when it should, sort of. The scene where the guilty party was realized, had my legs pulled from under me though. It was too sudden, coming out of nowhere. I paged back to see where I missed the run-up paragraphs to it, but couldn't find anything in the previous few pages. I might be totally wrong and will accept it, but I had the impression that the story was shortened. The concluding events were too drawn out and lost the rhythm of the exploded drama.

However, the shocking surprise lies waiting, the final moment of sucking in your breath hard and fast. It is something so totally unexpected, it will make you laugh or cry. Who was the lateRobert Bell really?

The events, characters, scenes, and everything else making this an excellent read, are all there in detail. There is so much depth to the story and people in it. It was definitely worth the time. Everything is concluded.

This book not only inspired me to read more books by A.D.Scott, but also to visit this amazing country and meet the inhabitants. I promise you, this severed leg is going to shake YOU right out of your socks!

PS: Adjectives: I love to use it! 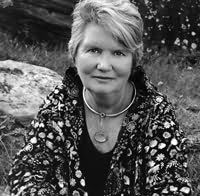 A. D. Scott was born in the Highlands of Scotland and educated at Inverness Royal Academy and the Royal Scottish Academy of Music and Drama. She has worked in theatre, in magazines, and as a knitwear designer and currently lives in Vietnam and north of Sydney, Australia.
Blog    *    Website    *    Facebook    *    Goodreads    *    Amazon

Reading this review is so helpful to me as an author. Often the insights from a dedicated reader teach me so much about the craft of writing.
So thank you. I take what you have said very much to heart.
Deborah
A D Scott