REVIEW: I, SPY (Spy Another Day, #1) by Jordan McCollum 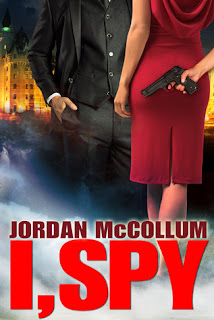 Canada is probably the last place you'd expect to find an American spy. But even idyllic Ottawa has its deadly secrets--and so does CIA operative Talia Reynolds. She can climb through ventilation shafts, blend in at the occasional diplomatic function, even scale buildings (small ones). But there's one thing she can’t do: tell her aerospace engineer boyfriend Danny about her Top Secret occupation.

It worked for a year, keeping Danny in the dark, keeping him away from danger, keeping her secrets. And then Talia finally catches a hot case: Fyodor Timofeyev. Russian. Aerospace executive. Possible spy?

She can make this work, too--until Danny needs her at the same time her country does. And when Fyodor targets Danny? Suddenly her schedule isn't the only thing suffering. Now to save her country and her secrets, Talia must sacrifice the man she loves.

Wow, what a page turner! Although Talia Reynolds had been a CIA officer for a while, she has never killed a person before. This changes when Fyodor Timofeyev becomes her next case. As the operation progresses, Talia's love life as well as the life of her boyfriend, Danny, hangs in the balance.

I could simply not put I, Spy down once I started reading. The action is nonstop and the nail-biting suspense never lets up. The book is written in such a comfortable, flowing style that it is easy to just forget to put it down. Action and scenes of fighting is described in a very realistic way. Unlike so many heroes and villains books where the heroes always win, I, Spy tells it more like it is; sometimes the bad guys are just too strong.

Talia, the main character, is the kind of tough female protagonist that I like. Yet, tough as she is, she still balks at inflicting bodily harm or killing people. She deals very realistically with attempted rape, her disintegrating love life and incredible work pressure. Her extensive knowledge of languages, especially Russian, makes Talia invaluable to the CIA.
She has this to say about her work.

"I can’t describe what it’s like to be involved in an op. You’re a master puppeteer, but you’re not pulling the strings. You’re synchronized swimming, moving in perfect harmony. You’re playing a symphony. Only instead of applause, you’re working for life or death.
The invisible connection with your team flows through your veins. You’re pushing yourself to the fullest of your capacity, and everyone else on your team is, too. Even when you’re left running on adrenaline and fumes, the conviction you’re doing the right thing for the right reason sings in every breath you take, and for that second, you own the world."

The other characters and specifically Danny, are very realistic with all the flaws and strengths of normal people. Although the book is written from Talia's point of view, I got a good impression of Danny's inner turmoil over him and Talia.

If you like spy stories with lots of action in a very realistic setting, this edge-of-your-chair read will definitely appeal to you.

I, Spy by Jordan McCollum has 17 reviews on Goodreads. Read it here.

An award-winning author, Jordan McCollum can't resist a story where good defeats evil and true love conquers all. In her day job, she coerces people to do things they don't want to, elicits information and generally manipulates the people she loves most--she's a mom.

Jordan holds a degree in American Studies and Linguistics from Brigham Young University. When she catches a spare minute, her hobbies include reading, knitting and music. She lives with her husband and four children in Utah.

Thanks for the review. This sounds fun and right up my wife's alley. :)

Thanks for taking the time to read this review, and for your feedback, Okie. :)

I missed this while on vacation, but what a wonderful treat to find now! Thank you so much, Ellen. I'm so glad you enjoyed it!

I missed this while on vacation, but what a wonderful treat to find now! Thank you so much, Ellen. I'm so glad you enjoyed it!