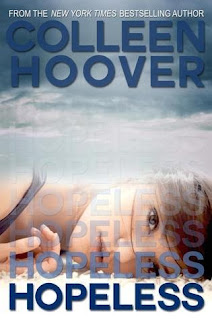 That’s what seventeen-year-old Sky realizes after she meets Dean Holder. A guy with a reputation that rivals her own and an uncanny ability to invoke feelings in her she’s never had before. He terrifies her and captivates her all in the span of just one encounter, and something about the way he makes her feel sparks buried memories from a past that she wishes could just stay buried.

Sky struggles to keep him at a distance knowing he’s nothing but trouble, but Holder insists on learning everything about her. After finally caving to his unwavering pursuit, Sky soon finds that Holder isn’t at all who he’s been claiming to be. When the secrets he’s been keeping are finally revealed, every single facet of Sky’s life will change forever.

“I guess that’s what makes lust so bittersweet. The feeling is beautiful, but the effort it takes to deny it is way too hard.”

I have so much I want to say about this deeply moving story, but saying too much might spoil it for those who haven’t read it yet, so I’ll try my best not to include any spoilers. I have conflicting feelings about Hopeless and to be honest I couldn’t make up my mind whether I wanted to rate it three stars or four. After a lengthy aromatic soak in the tub, I made up my mind to settle on a four-star rating. Here’s why.

First of all, I liked both the main characters. They’re complex, sometimes frustratingly temperamental, and other times just plain full of it. But still, their emotions and reactions to certain situations were realistic and relatable, and their snarky banter often had me in stitches – especially the text messages. I loved how they challenged each other and how they brought out the best in each other. Their attraction was instant and sizzling hot, and even though I’m not a fan of insta-love, this didn’t annoy me at all.  The second thing I liked about this book was the sensitive subject matter and how insightfully the author put it into words. I can’t identify with either Sky or Holder’s experiences, but heaven knows what Sky suffered is something no child should have to endure. I had the same amount of sympathy for Holder also for what he had to overcome. These two characters complemented each other perfectly and I’m happy with the way it all came together at the end. I also adored Six and Breckin and the story would’ve definitely had less of an impact without them.

“Let me inform you of something,” he says in a low voice. “The moment my lips touch yours, it will be your first kiss. Because if you’ve never felt anything when someone’s kissed you, then no one’s ever really kissed you. Not the way I plan on kissing you.”

As much as I enjoyed Hopeless, I also feel that at times there were a little too much of everything. Too much angst, too much kissing (about a hundred pages too much of that), and too much drama which just left me emotionally worn out.  About a hundred pages in I already grasped the bigger picture. They’re two halves of a unit where one half can’t function without the other. They need each other to heal. But it just went on and on and on. It didn’t make me enjoy the story less, it just moved to slow for my taste.

Another thing I liked about it, though, is that the author didn’t mould the “villain” (so to speak) into a typical, clichéd cartoon-villian character. Yes, I despised him for what he’d done, but I also wanted him to find redemption and atone for his wrongdoings – although personally I feel there shouldn’t be a place in society for such people. Anyway, my point is that the author evoked conflicting feelings in me for this specific character, and that, to me, is a sign of a writer who uses a no-holds-barred approach in showing the reader that people aren’t always what they appear to be and how easily trust can be broken by the ones we love the most. So, despite my complaints, I think this is a phenomenal read that wormed its way into my heart, and is fully deserving of all the glowing reviews it’s receiving. This is another book I’ve read because of all the hype it’s receiving and although it didn’t fully live up to my expectations, it didn’t disappoint either. I recommend it to everyone who enjoyed Katie McGarry’s Dare You To.

Hopeless by Colleen Hoover has 8 618 reviews on Goodreads. Read it here. 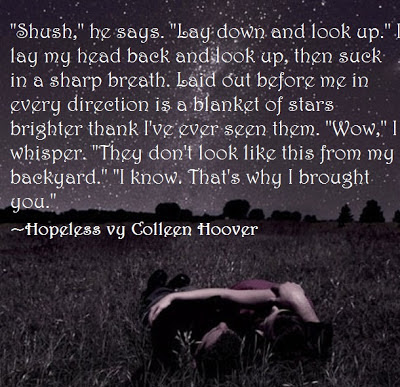 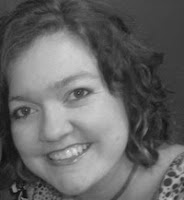 I love music. LOVE music. Namely The Avett Brothers, Lumineers, Pink, Eminem. I have eclectic taste? If you have any recommendations, send them my way!

I'm addicted to diet pepsi and could tell you in a taste-test which restaurant it came from. It's a serious addiction, I tell you.

I get stoked whenever I get a message from Goodreads saying I have a new friend request...so request me, dangit!