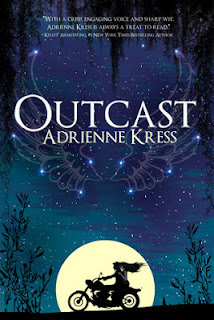 After six years of “angels” coming out of the sky and taking people from her town, 16-year-old Riley Carver has just about had it living with the constant fear. When one decides to terrorize her in her own backyard, it’s the final straw. She takes her mother’s shotgun and shoots the thing. So it’s dead. Or … not? In place of the creature she shot, is a guy. A really hot guy. A really hot alive and breathing guy. Oh, and he’s totally naked.

Not sure what to do, she drags his unconscious body to the tool shed and ties him up. After all, he’s an angel and they have tricks. When he regains consciousness she’s all set to interrogate him about why the angels come to her town, and how to get back her best friend (and almost boyfriend) Chris, who was taken the year before. But it turns out the naked guy in her shed is just as confused about everything as she is.

Set in the deep south, OUTCAST is a story of love, trust, and coming of age. It’s also a story about the supernatural, a girl with a strange sense of humor who’s got wicked aim, a greaser from the 50’s, and an army of misfits coming together for one purpose: To kick some serious angel ass. 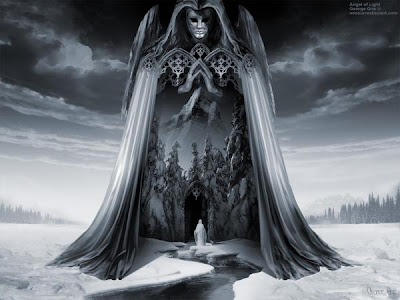 Usually it’s the cover of a book that attracts me to read it, and this gorgeous cover was no different. It reminded me of the covers for the Sookie Stackhouse books by Charlaine Harris, one of my all-time favorite authors. But what really got me wanting to read Outcast, was the premise. I’m not really fond of books with angel themes. I’ve read too many such books that didn’t add anything new to angels and humans falling in love; but this one sounded different. These angels didn’t sound like ones with whom you’d want to fall in love. These angels sounded bad-ass – exactly my kind of angels.

From the moment Riley shoots an angel in the face, the author starts building the suspense. Gabe, the angel Riley shot, believes it’s the year 1956 and he has no memory of being an angel coming to a small town once a year to abduct humans. From here on out the story moves really quickly as Gabe and Riley become friends and he gets a second chance at being a normal teenager, in stark contrast to the short-tempered, troublemaking teenager he was in back 1956. But the story is not as straightforward as it seems. Riley makes a lot of discoveries about Gabe, his past, and herself throughout the story, and she also discovers that she has a guardian angel and she is not who – or is it what? - she thinks she is.

Up until 79% into the story, it was a five-star read all the way. I simply couldn’t put it down and was glued to my seat, ignoring everyone and everything around me until I had finished the book. The author maintains a sense of foreboding throughout the story and a lot of creepy things happen to Riley as she tries to piece together everything that is happening in her small town, and how she and a ragtag group of townspeople can form a little army to stop these yearly events from taking place. Fuelling the tension is the Church of the Angels run by Pastor Warren, which borders on being a religious sect brainwashing just about everybody in town, and giving Pastor Warren a hold over law enforcement. I loved this part of the story most because cults fuelled by religious fervor and insane leaders frighten the heck out of me and the author builds on this fear really well. On top of all this Riley still has to deal with her feelings for Gabe, while Gabe is off dating almost every girl in their high school. Talk about plot twists, right?

Anyway, like I said it was a five-star read up until 79% into the story when, in my opinion, it became a little absurd. I don’t want to say here exactly what happened, because that would be a huge spoiler, but once Riley discovers what she is, the story lost a little of its appeal. I felt that what Riley became was unnecessary and the story would’ve had more of an impact if what happened at the end is something Riley accomplished as a normal human girl, and not as something else. It would’ve been far more impressive. I felt that her discovery of what she truly is, was only used as a plot device. The author did a fantastic job building up expectations for an action-filled ending, but sadly she does not deliver and the finale felt more like a balloon slowly deflating. The conclusion just didn’t pack that satisfying punch I was expecting through the build-up of events. The reveals for Pastor Warren’s floating and the strange voices being heard through the walls in the Church of the Angels, were mediocre and seemed more like an afterthought than an actual reveal. I guess a lot of things would’ve made much more sense if this was the first book in a series.

Apart from these few complaints, I really enjoyed the story. It’s refreshingly different and though the characters aren’t anything remarkable, they’re really likeable. A few explanations for things that happen in the story seemed too convenient, but all in all this is a terrific read with lots of humor and suspense and I’ll definitely read more books by this author.

Outcast by Adrienne Kress has 20 reviews on Goodreads. Read it here.

No purchase links available at this time.

Adrienne Kress is a Toronto born actor and author who loves to play make-believe. She also loves hot chocolate. And cheese. Not necessarily together.

She is the author of two children's novels: ALEX AND THE IRONIC GENTLEMAN and TIMOTHY AND THE DRAGON'S GATE (Scholastic). Her debut YA novel, THE FRIDAY SOCIETY, launched in the Fall 2012 from Dial, Penguin and her first ever quirky YA paranormal romance, OUTCAST, comes out June 4th, 2013 with Diversion Books.

Adrienne is a theatre graduate of the Univeristy of Toronto and London Academy of Music and Dramatic Arts in the UK. Published around the world, ALEX was featured in the New York Post as a "Post Potter Pick," as well as on the CBS early show. It won the Heart of Hawick Children's Book Award in the UK and was nominated for the Red Cedar. The sequel, TIMOTHY, was nominated for the Audie, Red Cedar and Manitoba Young Readers Choice Awards, and was recently optioned for film. THE FRIDAY SOCIETY was nominated for a Quill Award, and has been optioned for television.