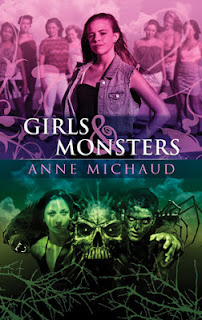 Death Song: Liz is in love with Joe, but the monster of the lake has other plans for them.

Black Dog: Scarlet is engaged in a struggle for her sanity, but according to the voice in her head, she may be too late.

A Blue Story: When Katherine's beloved dog goes missing, she fears her strange new neighbor might be involved.

Dust Bunnies: Christiane faces her childhood arachnophobia and ends up confronting even greater fears in this test of sisterhood.

We Left at Night: Brooke and her family must abandon their home and their lives to make it out of a disease-plagued town overrun by zombies.

Girls & Monsters is for everyone who has ever been brave enough to confront their childhood fears...and lived to tell about it.

I’m not a huge fan of novellas and much less compilations of novellas, but I found Girls & Monsters to be quite riveting. The cover played a big role in my decision to request it for review, but so did the title of each novella which got my curiosity working overtime. I wouldn’t say any of these short stories are “uplifting”, as suggested by the blurb, but they were entertaining in a macabre sort of way.

Death Song: Vengeful mermaids aren’t something you read about every day, and as interesting as it was to read about a mermaid terrorizing a community and stealing people through water pipes, the ending was confusing for me and I didn’t know what to make of it. If there was a double meaning to the end of the story, it went way over my head.

Black Dog: I must admit, ever since being attacked by a black dog when I was six-years-old, I’ve had a paralyzing fear of dogs in general, black dogs more than others. The author effortlessly tapped into my fear of canines by creating a story about a girl hunted by a black dog everywhere she goes. Is it real, or is it only her imagination? A riveting read, yet my least favorite of the five novellas. It was too dramatic for my taste.

A Blue Story: Here is where the book really picked up and got a solid hold on me. If you love your dog, cat, parrot, whichever pet you have, this novella will probably make you view your neighbor differently. I enjoyed A Blue Story and it did freak me out somewhat.

Dust Bunnies: Undoubtedly my favorite of all five these short stories. Are you afraid of spiders? You are? Then you definitely don’t want to read this novella. But for those like me whose fear of arachnids isn’t in the top five things that would instantly guarantee a heart attack, Dust Bunnies is an unexpectedly sweet story. I absolutely adored this story since I never imagined it could be possible to love a cuddly, human-sized spider.

We Left at Night: I’ve read many zombie apocalypse novels and novellas and am at that point where they’re all starting to sound the same. Surprisingly, the author managed to write something a little different to the usual zombie-theme, and at the same time keep me on the edge of my seat and nervously chewing my nails while the characters in this novella run for their lives. Out of all five stories, this was the only one in which I found the characters to be fleshed out and I actually felt a connection to them.

Overall, I’d recommend this compilation of dark novellas to sensitive readers new to the horror genre; readers who enjoy stories that prey on their fears, and those who like to journey into the darkest parts of the mind. It is blood-, guts- and gore-free and the author didn’t succumb to shock techniques to give this book a voice. Five well-written novellas that are sure to keep you awake for a while makes Girls & Monsters a great read.

Girls & Monsters by Anne Michaud has 19 reviews on Goodreads. Read it here. 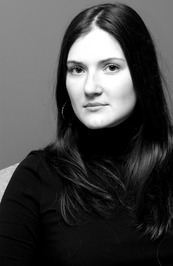 Anne Michaud is an author of many talents, especially getting distracted by depressing music and dark things. She likes to write and read everyday, and speak of herself in the third person.

Since her Master’s degree in Screenwriting from the University of London, England, Anne has written, directed and produced three short films, distributed by Ouat! Media in Toronto, Canada. The lyric documentary Worth a Thousand Words (2006) can be seen here.

And then, after hundreds of hours spent on studying and making films, she changed her mind and started writing short stories, novelettes and novels. Some have been published, others will be soon enough.