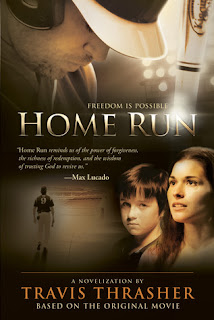 Baseball star Cory Brand knows how to win. But off the field, he’s spiraling out of control. Haunted by old wounds and regrets, his future seems as hopeless as his past.

Until one moment—one mistake—changes everything. To save his career, Cory must go back to the town where it all began. His plan is simple: coach the local baseball team, complete a recovery program, and get out as fast as possible. Instead, he runs headfirst into memories he can’t escape ... and the love he left behind.

Faced with a second chance he never expected, Cory embarks on a journey of faith, transformation and redemption. And along the way, he discovers a powerful truth: no one is beyond the healing of God.

A novel based on the major motion picture starring Vivica A. Fox and Scott Elrod, Home Run is an inspirational story of the hope and freedom God offers each of us.

As a rule, I don’t read Christian fiction for various reasons. One of them being my fear of such books turning into a preaching fest. Luckily this is not the case with Home Run. I haven’t yet seen the movie, so this story was one hundred percent fresh and new for me.

At first it took me some time to get used to Cory’s character and see things the way he did. I couldn’t understand why he wouldn’t let go of his anger. He was stubborn, he was miserable and he kept making the same mistakes over and over again, and he continued to push away the people who cared about him the most. Cory’s self-loathing started to get on my nerves after awhile. But once I got to the last thirty percent of the book, I could see where the author was heading with Cory’s story and why he behaved the way he did. I’m not saying the story started getting predictable, because that’s one thing it is not. I’m saying that in order for Cory to come to the realization that he had to take control of his life and that only he could make the changes necessary to let go of his abusive past, he had to work through all his anger first before he could step onto the road to recovery.

Like I said before, the story wasn’t preachy at all. It focused on the theme of forgiveness and coming to terms with the things we cannot change, but also the things we have the power to change. This message was neatly packaged in a story about a man who fought every attempt made by himself and others in helping him overcome his demons. The characters are endearing and makes you feel part of their lives. Two things that stood out for me were that Cory wasn’t the only one who had to deal with events from his past and who had to make changes in his life; and the other is that – and this is what really surprised me – Cory and Emma didn’t fall into each other’s arms or followed the clichéd, predictable pattern of many love stories where the long-lost lovers have this happy reunion and make a brand new start. Instead, Emma and Cory have to deal with a lot of resentments and face up to their past actions before they can attempt being a couple again and taking responsibility for their son.

The only drawbacks for me where the flashbacks Cory had. I realize the point of these was to give the reader more insight into Cory’s past as a child and as a young adult, and for the reader to better understand where all Cory’s resentment stems from. However, it was sometimes confusing as to exactly which part of his life the flashbacks were taking me to as a few of the flashbacks were of his present day life. Also, I was sometimes confused with the dialogue and not sure which character was doing the talking. This didn’t dampen my enjoyment of the story, but it did take me some time to orientate myself again during a flashback.

And then, the ending. The beautiful, unpredictable, ending which made me cry. For that alone I highly recommend this book, but overall Home Run is a touching story which left me feeling inspired and thinking how easy it is to stay angry at someone, and how much work it is to forgive that person who did you wrong. It also showed me that forgiving someone is life changing and the burden of anger and hate, worth letting go. The author did a fantastic job with the writing and I’m happy to recommend this story to fans of the book/movie Fireproof and those who enjoy baseball.

I received a copy of this book from the publisher, via NetGalley, in exchange for an honest review.

Home Run by Travis Thrasher has 29 reviews on Goodreads. Read it here.

Few authors have shown such diversity as Travis Thrasher. From starting his career with sweet and moving love stories, Travis has navigated through various genres including suspense, adventure, and most recently supernatural thrillers. At the core of each of his stories lie flawed characters in search of redemption. He loves surprising his readers, not only with a different style of writing in each book but also with amazing twists in each story. The author of eighteen critically-acclaimed works of fiction, Travis lives with his wife and three daughters in a suburb of Chicago.