REVIEW: "THE GIRL WHO THREW BUTTERFLIES" - by Mick Cochrane 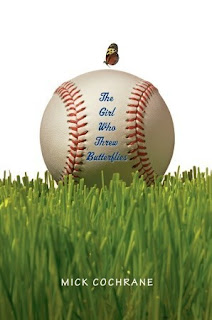 For an eighth grader, Molly Williams has more than her fair share of problems. Her father has just died in a car accident, and her mother has become a withdrawn, quiet version of herself.

Molly doesn’t want to be seen as “Miss Difficulty Overcome”; she wants to make herself known to the kids at school for something other than her father’s death. So she decides to join the baseball team. The boys’baseball team. Her father taught her how to throw a knuckleball, and Molly hopes it’s enough to impress her coaches as well as her new teammates.

Over the course of one baseball season, Molly must figure out how to redefine her relationships to things she loves, loved, and might love: her mother; her brilliant best friend, Celia; her father; her enigmatic and artistic teammate, Lonnie; and of course, baseball.

What an incredible read! This really is one of those books I can see myself reading again and again, and which I won’t hesitate to recommend as a must-read.

A few of the things I loved so much about Molly is how realistically she’s painted and how easy it was to relate to her in some ways. Also, she doesn’t come across as a strong character at first because she’s shy and withdrawn, but she’s intelligent and astonishingly perceptive of her surroundings and the people around her. The reader learns more about Molly’s parents, which is a vital part of the storyline, by the way Molly draws the comparisons between her mom and dad’s different personalities – done perfectly to “show” the reader how this little family functioned before the death of her father pulled them apart. Sadly, the relationship between Molly and her mother is more than a little strained after Molly’s father’s death. It was heart-rendering to see Molly trying to reach out to her mother for a little affection, but knowing she might be rebuffed, pulling back into her shell again.

“Her mother was right there in front of her, and still, somehow, Molly missed her. It didn't make sense, but it was true. She missed her mother who laughed, her mother for whom life was not one tedious task after another. It was as if that woman had been kidnapped—she might be tied up in a basement somewhere. And in her place there was this mother, a joyless impostor wearing her real mom's clothes.”

Once Molly’s on the baseball field, though, she regains some of her confidence and she shines! The budding friendship on the field between Molly and Lonnie drew me so much deeper into Molly’s world. Not only is Lonnie her personal catcher, he’s also the type of friend who doesn’t mind sticking up for the only girl player on his team. The author didn’t sketch him as a typical obnoxious teenage boy, but rather as a quiet, artistic kid dealing with his own set of problems at home. So by the way…I know zilch about baseball, but I gained a lot of knowledge about the game - and some wicked baseball trivia – while reading this book. Plus, the game practices, the excitement, anxiety, the build-up, and the game itself was so well described, I felt like one of the players on the field. It was awesome!

“She was not a tomboy, just a girl who liked baseball.”

I absolutely loved Molly’s best friend, Celia. Her spontaneous personality and strong character reminded me very much of my own best friend I had in school. Molly isn’t as outgoing as Celia, but their different personalities complement each other perfectly. Celia – even though she’s not into sports at all – is Molly’s biggest cheerleader and encourages her all the way. Who wouldn’t want a friend like her?

“She was not shy, that was for sure. She was part of the horn section in band with Molly. She played the tuba. All her parts were boring, of course —it wasn't like she was ever going to play a solo. But Molly always figured that her friend simply relished the chance to make a big noise.”

One thing the author did tremendously well was to bring home to the reader the importance of Molly’s dad in her life. From the get-go you understand that he was the foundation of their family. He wasn’t perfect, but Molly was the apple of his eye, and he likewise was her whole world. Every time she had flashbacks or a memory about her dad, it tugged at my heart. Many times Molly’s inner-dialogue and thought processes had me smiling by the way she perceived things, but I couldn’t ignore the underlying sadness she constantly felt at the loss of this very important figure in her life. Everything Molly did pointed back in some way to something her dad had taught her - especially everything about baseball.

“Molly knew that other girls had tea parties with their dads. She played catch with hers. It wasn't weird, it wasn't cool, it was just what they did together.”

Baseball, teamwork, friendship, and closure are the prevalent themes in this heartfelt story. The author expertly blends together Molly’s friendships with Celia and Lonnie, her floundering relationship with her mom, and Molly gaining self-confidence on the baseball field while working through the heartache of her father’s death, to form the basis on which this story is built. Sometimes I find that certain books in which a character has to deal with the loss of an important person in their life, it can become emotionally taxing. Here it’s not the case. It’s not often I come across an author who tells a story in such a touching way, it has me reading most of the book with tears in my eyes, and without me feeling emotionally worn-out at the end.

The Girl Who Threw Butterflies might be most suitable for readers aged nine to twelve, but I have to admit, I had a wonderful time reading this book. It elicited all the good feelings a fantastic book that ends on a satisfying note can leave with you after turning the final page. I’d recommend it to anyone who’s into baseball, or those who can relate to dealing with the loss of a loved one. Readers who simply enjoy books with a powerful moral-of-the-story theme and a feel-good ending, will undoubtedly also find something to love about this story.

The Girl Who Threw Butterflies by Mick Cochrane has 197 reviews on Goodreads. Read it here.

Mick Cochrane was born and raised in St. Paul, MN. As a boy, he played a great deal of baseball and was a passionate fan of the Minnesota Twins. His early jobs included working for McDonald’s, mostly ineptly, and cutting grass and chalking fields for the West St. Paul Park and Recreation Department.

He graduated with an English major from the University of St. Thomas and earned a Ph.D. in English literature from the University of Minnesota. While a graduate student, he published his first story, The Lenny Green Story, in Minnesota Monthly magazine. His first novel, Flesh Wounds, was published by Nan Talese/Doubleday and named a finalist in Barnes and Noble’s Discover Great New Writers Competition. His second novel, Sport, was published by Thomas Dunne Books/St. Martin’s and selected for the annual New York Public Library’s Books for the Teen Age List.

He teaches courses in writing and literature, directs the creative writing program, and coordinates the Contemporary Writers Series. He lives in Kenmore, NY, with his wife and two sons.