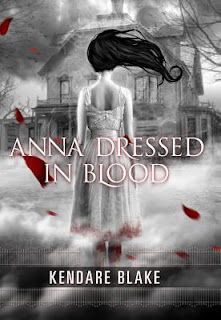 Cas Lowood has inherited an unusual vocation: He kills the dead.

So did his father before him, until his gruesome murder by a ghost he sought to kill. Now, armed with his father’s mysterious and deadly athame, Cas travels the country with his kitchen-witch mother and their spirit-sniffing cat. Together they follow legends and local lore, trying to keep up with the murderous dead—keeping pesky things like the future and friends at bay.

When they arrive in a new town in search of a ghost the locals call Anna Dressed in Blood, Cas doesn’t expect anything outside of the ordinary: move, hunt, kill. What he finds instead is a girl entangled in curses and rage, a ghost like he’s never faced before. She still wears the dress she wore on the day of her brutal murder in 1958: once white, but now stained red and dripping blood. Since her death, Anna has killed any and every person who has dared to step into the deserted Victorian she used to call home.

And she, for whatever reason, spares his life.

Anna Dressed in Blood is a combination of two of my favorite genres: YA and horror. I couldn’t wait to get around to reading it, though I’ll admit that I was a little skeptical at first, fearing it might be just your average YA love story. But after reading only a few chapters I discovered that Kendare Blake is not your average, YA love story writer.

One of the many reasons I enjoyed this book so much is because it breaks out of every typical, overused YA mould imaginable. It’s also one of the few YA books I’ve ever read from a male protagonist’s point of view. And the author nails it! The ending is unpredictable and it’s not a happy ending, but not an unhappy one either. It doesn’t leave you hanging, but leaves you satisfied and curious enough to want to read the next book, Girl of Nightmares. I would’ve happily given it five stars, but the pacing is not consistent and from time to time it slows down a lot - especially after Cas discovered how Anna died – before picking up again and throwing the reader head first back into the action. Another thing I loved about this story was all the different characters. Even the bullies weren’t your usual cartoon cut-out bullies. All the characters complemented each other in different ways to further the plot. Of course, my favorite character was the cat, Tybalt. Nothing average about this feline, I tell you. And Anna…wow! What a surprise this goddess of death turned out to be.

As a fan of horror, I can’t really classify this as a true blue horror, because I didn’t find anything scary about it. It does have lots of gore though and for readers who don’t usually read horror, there are definitely a lot of terrifying scenes in this book. The only scene that had me freaked out was when Cas and his mom were standing in his room and they could hear something coming down the attic stairs and they had absolutely no clue what it was. That sure had the hairs on my neck rising. This is something the author is really good at. She knows how to build up the suspense to that point where you have to put down the book for a minute, take a few deep breaths to bring your heart rate back to normal before you continue reading.

Fans of the tv series, Supernatural, will love this book. Yes, I’m also a fan of the Winchester brothers and although Anna Dressed in Blood is not a carbon copy of this tv series, you can’t help being reminded thereof while reading this fantastic book. I can easily see why this is a bestseller and I’m happy to add my voice to the thousands who loved this book. Kendare Blake, you rock!

Anna Dressed in Blood by Kendare Blake has 3889 reviews on Goodreads. Read it here. 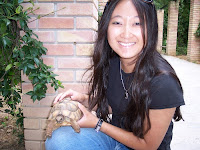 Kendare Blake grew up in the small city of Cambridge, Minnesota. She is a graduate of Ithaca College, in Ithaca, New York and received a Master of Arts in Creative Writing from Middlesex University in London, England. She loves to travel, is an advocate for animals, and cheats a lot when she plays Final Fantasy. Adopted from South Korea at the age of seven months, she arrived with the following instruction: "Feed her chocolate." Though not medically advisable, she and her parents are eternally grateful for this advice.

Kendare Blake's short fiction has appeared in numerous markets, including The Momaya Press Annual Review and Mirror Dance Magazine, among others. Her debut novel, Sleepwalk Society, deals with four friends coming of age post 9/11. ANNA DRESSED IN BLOOD (2011), and GIRL OF NIGHTMARES (2012), are YA horror chronicling the strange life of Cassio Lowood, a teenage ghost hunter who falls in love with the dead girl he was supposed to kill.

The ANTIGODDESS series launches in 2013.

I'm glad you enjoyed the book! Kendare Blake is a great writer. I have to admit, just like you, I expected it to be a little more horrorish. There was maybe a few moments that did have horror parts like when Anna ripped the guy in half, but it was still a great book. Great review :)