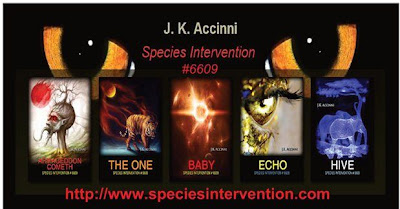 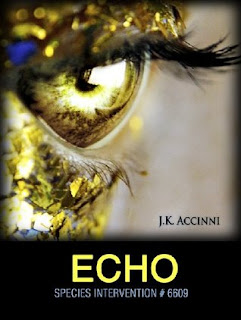 Netty’s influence transcends a full century as the United States evolves to a point of politically driven economic collapse. The year is 2033 as a young mother, abused by her shiftless husband, heroically decides to remove her two sickly children, Scotty and Abby, from the mean streets of their government subsidized tenement town of Short Hills, New Jersey to the hills and old farmland of Sussex County. There they unite with a Latino family that adopted Jose, a young boy from Costa Rica, traumatized at the age of seven by the brutal murder of his parents and the kidnapping of his infant sister.

The two families unite to pool finances, creating the love and bonds that will enable them to survive the psychotic attention of Armoni, a soul damaged beyond redemption, discovery of Baby’s miraculous offspring, Echo; and their subsequent body changes. Through the efforts of Echo who develops an unexplained passion for the curly haired dog, Barney, they flee the clutches of Armoni after the murder of Armoni’s sidekicks by Echo, to Sarasota, Florida, one of the last remaining enclaves of wealth in the U.S.

Scotty learns to utilize Echo as a co-conspirator in his intrigue to thwart the efforts of heinous people that prey on the lives of creatures in their environmentally rich new home, where the insidious miscreant, Armoni, tracks them; dragging along Ginger Mae, a New York City prostitute looking for opportunity with her mute child, Daisy; bringing brutality and violence to all.

Having fallen in love, the young  Abby and Jose draw close, only to be separated by the transcendental Netty, who tries to use Abby as a conduit in her plan to rescue as much wildlife as they can before despicable political events bring on the specter of Armageddon.

Echo by J.K. Accinni has 12 reviews on Goodreads. Read it here.

J. K. Accinni was born and raised in Sussex County before moving to Randolph, New Jersey, where she lived with her husband, five dogs and eight rabbits, all rescued and currently resides in Sarasota, Florida. Mrs. Accinni’s passion for wildlife conservation has led her all over the world, including three trips to Africa, where ten years ago she and her husband fell in love with a baby elephant named Wendi, that had been rescued by a wildlife group. That baby is the inspiration for the character Tobi, the elephant featured in her fourth book titled Hive.

The character of Caesar is inspired by a real life iconic tiger from Big Cat Habitat and Gulf Coast Sanctuary in Sarasota. A portion of the proceeds from her third book, Armageddon Cometh, will be donated to the sanctuary in support of the enormous expense required to house and feed the displaced wildlife in their care. Mrs. Accinni invites her readers to visit bigcathabitat.org to view the astounding facility and plan a visit with your family. 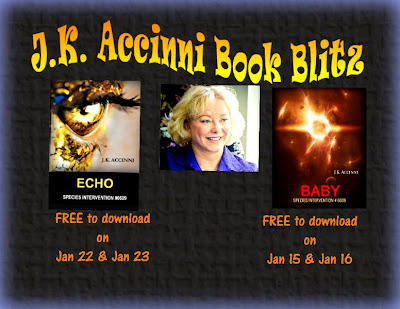 Download your copy of Echo by J.K. Accinni, review it in the next three months to stand a chance to win one of the following prizes!

For more information as to where to post your review and enter the links to your review for the drawing to win one of the abovementioned fantastic prizes, join the Species Intervention 6609 Facebook Group which was specifically created for this event. There are loads of other prizes to be won when you’re part of this group. Go check it out!