“THE SEVEN MARKETS”
by David Hoffman

Once in every century, for three days only, the Market comes.

Her whole life, Ellie MacReady has delighted at her papa’s stories of the fantastical Market. The creatures that walk its streets. The wonders waiting in every shopkeeper’s window. The exotic foods and unearthly scents which tempt travelers on every corner.

But in all his stories, her papa never mentioned the irresistible Prince, or the perils which await young girls who wander away to explore the Market on their own.

I can honestly say I’ve never read anything like this before. The title and premise of the book tickled my curiosity and led me to believe that I’ll be taken on a fantastical journey through vibrant, mysterious markets like none other. In that sense, “The Seven Markets” lived up to its promise. Also, I really liked the cover, which only added more to my curiosity. The reader, along with Ellie, visits seven markets with the first starting in the eighteenth century and the last ending in the distant future. Each market is different than the one before and I applaud the author for creating truly imaginative worlds for the reader to explore.

The reasoning behind my three-star rating though, is that I simply didn’t get the point of this book. The plot is imaginative, unique and complex, but hard to follow. It started out really well with a story full of promise, but near the end of the first market, I was completely lost and couldn’t manage to catch up again. Each market is set in a different century and the further along I read, the more confused I was. Nothing made sense to me and I only finished this book out of sheer curiosity, hoping for a conclusion which would explain everything to me. Sadly, this never happened.

Now, I’m not saying you shouldn’t pick up this book. No, I’m saying that for me, this just wasn’t my cup of tea. I really liked Ellie’s character at the start of the book, but I felt that when the journey to the markets started, Ellie and the rest of the characters became rather dull. What kept my interest was the feel and ambience of the different markets – which the author managed to describe rather well, enough mysteries and surprises to keep me guessing all the way, and of course the fact that I thought somehow it would all come together at its finale. The writing was done very well, but most of the time the transitioning from one scene to the next was abrupt and left me feeling whiplashed.

Usually I wouldn’t read anything by an author whose first book I read disappoints me, but in this case I’ll make an exception, because although this story made no sense to me whatsoever, I still enjoyed the author’s creativity. And like I said before, the writing was really well-done. It showed me that this writer has potential and the ability to come up with fresh new ideas to intrigue and enthral the reader.  Overall the story concept was interesting and out of the ordinary, and I’m happy I had the opportunity to have read this book.

I received a free copy of this book from the publisher via Netgalley, in exchange for an honest review.

“The Seven Markets” by David Hoffman has 4 reviews on Goodreads. Read it here. 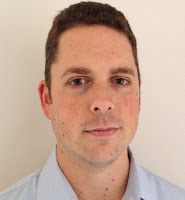 David Hoffman is the author of The Seven Markets and the forthcoming suburban fantasy Beautiful Handcrafted Animals. He earned his B.A. in English at the University of Wisconsin, Madison and lives with his wife in Westchester, New York. Hoffman is currently working on two books, and really ought to sleep more.