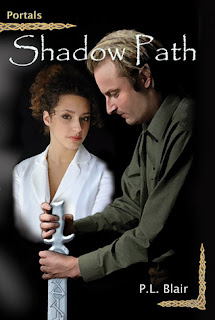 An Ogre murdered with a rune-inscribed sword is just the beginning as Kat Morales, a very human police detective in Corpus Christi, Texas, and her Elf partner Tevis MacLeod follow a blood trail that leads to Pixies, necromancy and Magic of the Blackest kind … to its climax in a stronghold Between worlds, where Tevis must duel spell for spell with a former lover who wants to see her old flame extinguished permanently.

One step over the threshold, and Tevis stopped so fast Kat nearly ran into him. “I … see what you mean. Arvandus,” he scowled over his shoulder at the Wizard, “is this wise?”
“I have cast a spell — several in fact. We are the only ones who can see it.”
Kat pushed past her partner. And stopped, gawking. An open carriage hovered in the air inches from the balcony railing. A silver-white horse, large but well-proportioned, hovered between the traces. At the reins sat an individual who appeared to be Mideastern, bearded and clad in shirt, trousers — even a turban and pointed-toed slippers — straight out of the Arabian Nights.
“… we and any other creatures from the Realms,” Tevis was saying. “Coira will hear of this.”
“I certainly hope so! I'm not expending energy on these spells just for the fun of it, you know.” Arvandus drew a breath, released it. “I suspect she knows already that a Wizard has taken an interest in her affairs — or, at the very least, is considering that possibility. But I want her to be certain, without any doubt, that not merely a Wizard, but a Wizard of the First Rank, has taken interest in her doings, and that you and Kathryn have an ally.”
He inclined his head in a slight bow to Kat, who had managed, finally, to tear her gaze from the fantastic coach and its driver.
“I do not believe Wizards impress her that greatly, Arvandus. She has killed one of you already. She will not stop at killing another.”

The Shadow Path
Author's note: One of the principal characters in my fantasy/detective novel, Shadow Path, has volunteered to fill in for me on this blog:

It starts with the dead ogre. Killed with a sword inscribed with seven runes that, according to my partner, are deadly. My partner – Tevis – is an elf. He knows these things.

I'm Kat Morales, and we're both detectives with the Corpus Christi, Texas, police department. I didn't even know elves actually existed until four years ago, when Portals opened Between our world – the world of humans – and the world that Tevis calls the Realms of Magic. Quite a shock for a lot of people when that happened.

But that's another story. Tevis and I have been called in to investigate the ogre's murder, and it led us to the shop of a banshee, Maeve … and partnership with a wizard – Arvandus – an old friend of Tevis', it turns out … and a confrontation with a pixie …

Forget Tinkerbell. The only thing real pixies have in common with Tinkerbell are the small size, and don't let that fool you. Real pixies are blood-thirsty little flesh-eaters.

But the one that tried to kill me was just a flunky for Coira, another elf – a nasty specimen whose real intent was to kill Tevis. They'd been lovers once – I don't even care to think about how long ago that was in human years – but Tevis left her when she turned to black magic. Death magic. What Tevis calls the “shadow path.”

So now Coira wants Tevis dead. And to get his attention, she's trailing a string of corpses behind her, a trail that leads to her stronghold between worlds. Tevis and I have to go after her. And Tevis has to call on magic – wizardry that he gave up thousands of years ago. He has to fight Coira in a duel of spells. And if he loses …

A native of Tyler, Texas, P.L. Blair spent nearly 30 years as a full-time newspaper reporter before writing Shadow Path, book 1 in her Portals fantasy/detective series. Now semi-retired – and still writing (part-time) for a newspaper in South Texas – Blair divides her year between Sheridan and Rockport, Texas, where she has family. She is companion to two basset hounds, a long-haired dachshund and a cat – all rescues. She writes a regular column and is a book reviewer for myshelf.com, and writes occasional articles for the Wyoming Business Journal.

P.L. Blair is generously giving away an e-copy of “Shadow Path” to one lucky reader. Giveaway ends on Tuesday, 20 March 2012 at midnight. Enter here via rafflecopter!

Your book sounds amazing and I so want--no--need to read it!

Hmmmmm...have to read it! I love the paranormal! Thank you for the giveaway *smiles*

This sounds like something I would love to read! This is a great giveaway! Thanks! Lynn Worton

Neet way to meet a character and learn more about her. I enjoyed the blog and gave it a tweet. Don't know if this will go -- old age eyesight has trouble proving I'm not a robot.
Nash Black

So nice to see you here, PL! Great last line of Kat's interview!

On my TBR list even if i don't win! sounds amazing!

Hi to everyone who's visited and commented! My apologies -it took me a while to catch up and figure out how to get here.
As anyone who knows me for a while will tell you ... I'm not very high-tech (understatement!).
But thanks for stopping by, and I wish all of you the very best of luck in the upcoming drawing.

Irene ... I so understand about the robot-lines thing ... I sometimes have to make three tries before I succeed in convincing the "techno-gods" that I'm a human. (I would think my inability to read those lines would be proof enough ...)