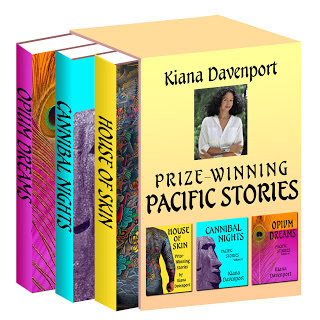 Bestselling author, Kiana Davenport (The Spy Lover, Shark Dialogues) is pleased to offer a Special Edition Boxed Set, featuring the first three volumes of her Prize-Winning Pacific stories, many of which have appeared in the O.Henry Awards, the Pushcart Prizes, and The Best American Short Stories. Set across the Pacific, in islands where the author has traveled and lived, the stories comprise tales of love, lust, racism, family, murder, rape, the search for identity, and the universal search for human dignity.

READER REVIEWS FOR THE PACIFIC STORIES

(5 Stars) "FLAWLESS PROSE...Rivetting characters. A must-read for anyone who wants to delve into the dark side of Paradise." -- Honi Aumiller

(5 Stars) "EXTRAORDINARY!...Absolutely stunning. She has introduced me to a world I might never have known." -- Scott Fitzgerald Gray 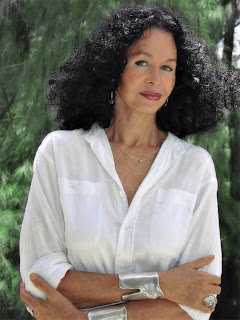 KIANA DAVENPORT is descended from a full-blooded Native Hawaiian mother, and a Caucasian father from Talladega, Alabama. Her father, Braxton Bragg Davenport, was a sailor in the U.S. Navy, stationed at Pearl Harbor, when he fell in love with her mother, Emma Kealoha Awaawa Kanoho Houghtailing. On her mother's side, Kiana traces her ancestry back to the first Polynesian settlers to the Hawaiian Islands who arrived almost two thousand years ago from Tahiti and the Tuamotu's. On her father's side, she traces her ancestry to John Davenport, the puritan clergyman who co-founded the American colony of New Haven, Connecticut in 1638.

Kiana is the author of the internationally best-selling novels, SHARK DIALOGUES, SONG OF THE EXILE, HOUSE OF MANY GODS, and a new novel, THE SPY LOVER, now available in paperback and on Kindle. She is also the author of the collections, HOUSE OF SKIN PRIZE-WINNING STORIES, CANNIBAL NIGHTS, PACIFIC STORIES Volume II, and OPIUM DREAMS, PACIFIC STORIES, VOLUME III. All three collections have been Kindle bestsellers. She has also been a guest blogger on Huffington Post.

A graduate of the University of Hawaii, Kiana has been a Bunting Fellow at Harvard University, a Visiting Writer at Wesleyan University, and a recipient of a National Endowment for the Arts grant. Her short stories have won numerous O. Henry Awards, Pushcart Prizes, and the Best American Short Story Award, 2000. Her novels and short stories have been translated into twenty-one languages. She lives in Hawaii and New York City.

"She exhibits the character great writers must have. You can't read Kiana Davenport without being transformed."
-- Alice Walker

"Reading Davenport is an overwhelming experience. Her prose is sharp and shining as a sword."
-- Isabel Allende

"Her writing has an intensity of feeling, a dedication to a level of writing few bestsellers possess."
-- Norman Mailer

"Davenport's imagination and her vision will haunt you for a long time."
-- The Chicago Tribune

Open only to those who can legally enter, receive and use an Amazon.com Gift Code or Paypal Cash. Winning Entry will be verified prior to prize being awarded. No purchase necessary. You must be 18 or older to enter or have your parent enter for you. The winner will be chosen by rafflecopter and announced here as well as emailed and will have 48 hours to respond or a new winner will be chosen. This giveaway is in no way associated with Facebook, Twitter, Rafflecopter or any other entity unless otherwise specified. The number of eligible entries received determines the odds of winning. Giveaway was organized by Kathy from I Am A Reader, Not A Writer http://iamareader.com and sponsored by the author. VOID WHERE PROHIBITED BY LAW.